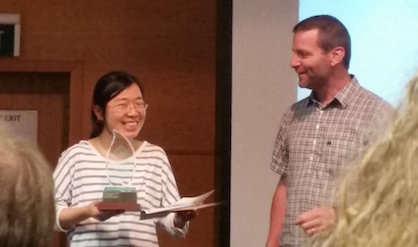 A paper published by Ann Liu, as first author, in the journal Biology of Sex Differences, has been awarded the Best Postgraduate Paper Prize at the Department’s annual research day. The paper details the first transcriptomic analysis of sex differences in a protogynous fish. Using RNA-Seq, the authors characterized the transcriptomic profiles and identified genes exhibiting sex-biased expression in the brain (forebrain and midbrain) and gonads of male and female bluehead wrasses as a first step towards understanding the basal states of the molecular cascade that progressively re-engineers a female into a male.

Described by her primary supervisor Professor Neil Gemmell as “an important paper” and “the first such study of a sex changing system”, the paper has already been cited 5 times since publication in November 2015.

Neil said this was an impressive piece of work with many of the hypotheses, experimental work, data collection, analyses (many at the absolute cutting edge of the field) and writing were done by Ann, at the same time as she was in her final year of writing up her PhD thesis.

Ann successfully defended her thesis at an oral exam in 2016, and after a brief stint away is continuing her research with the Gemmell research group as a Postdoctoral Fellow on the same project which is supported by the Marsden Fund.