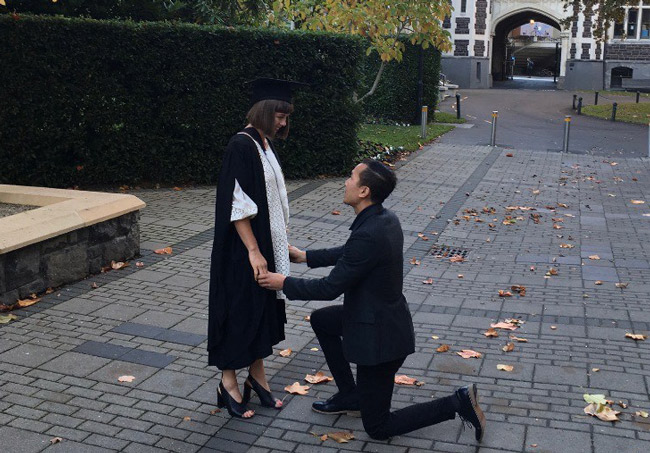 "Yes" … Zin Khant Aung made Rosemary Duffy’s graduation day even more special this month when he asked her to marry him.

Despite being filled with nerves, Zin Khant Aung dropped to one knee in the University’s Quad and proposed to his girlfriend Rosemary Duffy on her graduation day this month – making the important day twice as special for the Bachelor of Applied Science graduate.

He says he chose her 13 May graduation day to propose in order to make the occasion even more memorable. But although he had planned his question carefully, like most would-be grooms, he was extremely nervous when it came time to ask it.

"I memorised my proposal well and I falsely had confidence I would propose calmly, but when I started to speak, the breath was taken out of me and I was extremely nervous."

“I memorised my proposal well and I falsely had confidence I would propose calmly, but when I started to speak, the breath was taken out of me and I was extremely nervous,” he says. “But she said ‘yes’ and assured me I spoke well.”

The proposal came as “a complete surprise” for Miss Duffy. Happily, her mother and sister were taking graduation photos and managed to capture the special moment on camera too – “despite the fact they were both sobbing with joy.”

Mr Aung says the engagement is also thrilling for his family, who met Miss Duffy for the first time in Myanmar, where Mr Aung is originally from.

The pair plan to get married next February, at the Otago Yacht Club.

“We realise that our wedding is not just about us, but more importantly it's about celebrating family, friends, and the conditions in this complex world that have allowed us to be lucky,” Mr Aung says.

Since leaving university Miss Duffy has created a housekeeping and nannying business called My Housekeeper, which she says is quickly expanding.