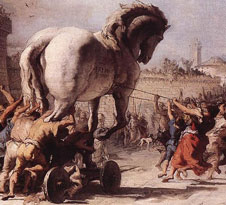 Pests like mice and wasps may one day be eradicated using a new technique which scientists have just proven in the laboratory on fruit flies.

Professor Neil Gemmell, the head of the University of Otago’s Department of Anatomy, says the “Trojan Female Technique” (TFT) – in which females pass on genes that make male offspring infertile – offers pest-control advantages that are likely to help as New Zealand strives to reach the Government’s Predator Free 2050 goal.

In a recent paper published by eLife, Professor Gemmell and co-authors report their success in making their theory about Trojan female fruit flies a reality in the lab.

“This is a world-first proof-of-concept and we need to test the general applicability of this approach more widely.”

Mitochondria are considered the “power generators” of a cell and turn oxygen and nutrients into chemical energy which runs the cell's metabolic activities.

“The essence of our idea is to use these mitochondrial mutations to produce continuous, self-sustaining biological control.

“What we discovered some years back is that, as a by-product of the maternal inheritance of mitochondrial DNA, mutations that affect only males can occur quite commonly in populations, potentially contributing to fertility issues in some populations,” he says.

“Our idea turns this problem around. If these mutations can affect population viability, we wondered if they might be turned into a tool that has the potential to control and even eradicate pests.

“Our paper – conducted in collaboration with Dr Damian Dowling and Dr Jonci Wolff of Monash University – shows that population reduction, albeit at this stage quite modest, can be achieved in laboratory-raised fruit flies.”

Professor Gemmell says broadening this technique to introduce Trojan females into wasp and pasture weevil populations is under way, with funding from the Biological Heritage National Science Challenge and the Ministry of Business, Innovation and Employment.

“There are several advantages of this approach, which does not require elaborate, and probably uncontrollable, delivery systems, such as parasitic vectors and intermediate hosts.

“It is species specific, there is little danger of accidental release or cross-species transmission, and it is adaptable to any pest species, because mitochondria are common to all higher organisms.

“While there are many tools to control pest populations, we think this might be an important part of a growing arsenal. Certainly around New Zealand there is a great deal of interest in this approach as a way to control rats, possums and stoats as part of the Predator Free 2050 goal.”

Co-author Dr Dan Tompkins, who is Landcare Research’s Managing Invasives Portfolio Leader, says another critical advantage is it is an approach that does not require genetic modification.

“This technique is currently being explored for application to pasture weevils, which cause millions of dollars of loss to the dairy and other livestock industries each year. This is particularly relevant at the moment, given data suggesting that the current biocontrol of these weevils could be failing.

“It could potentially also be used for controlling vertebrate pests, but that line of research is several years behind insect work and is currently unfunded in New Zealand.”

Pests are estimated to cost New Zealand about $3.3 billion a year through lost productivity and cause profound damage to native fauna and flora. The implications globally are even larger, particularly when insect-borne diseases, like malaria, are considered.