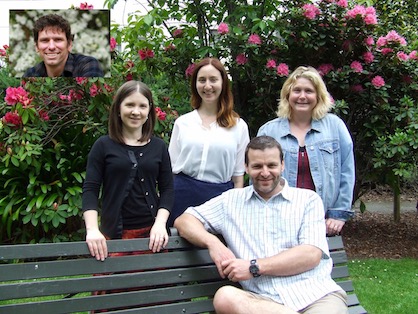 Five researchers in the Department of Anatomy have attracted $3.3m in funding from the latest Marsden Fund round. Head of Department Professor Neil Gemmell said he was delighted the excellent research undertaken in the Department has been recognised with this prestigious funding, and he was especially thrilled for the two early career researchers who have received Fast Start grants.

A total of 33 research projects in the University of Otago received funding in this latest round – the University’s most successful round ever. Marsden grants are regarded as highly contestable and the most prestigious national funding source in New Zealand.

Details of the research projects are:

Associate Professor Greg Anderson
Deconstructing the neuroendocrine requirements for puberty onset and ovulation
$960,000
The timing of puberty and subsequent ovulatory cycles requires exquisite coordination of genes, hormones and brain circuitry. Several neuronal pathways have been identified as being involved, but exactly how they affect reproductive activity is poorly understood. Firstly, we will first characterise the role of three different populations of neurons located at the base of the brain (termed AgRP, RFRP and GALP neurons) in controlling puberty onset and ovulation. This will be accomplished using newly developed mouse models which enable the activity of individual neuronal circuits to be activated or silenced at will. Second, we will determine how these neurons are regulated by the hormones estradiol and leptin, which provide feedback from the gonads and information about nutrient availability. To do this, we will ‘knock out’ the receptors for these hormones from the selected neuronal populations and comprehensively assess puberty onset and a range of fertility measures. Lastly, we will determine the site of action of RFRP neuropeptides by knocking out their receptor from potential target cells. Understanding how these circuits shape reproductive activity will contribute to the development of new treatments for human infertility and suboptimal breeding in animal production systems.

Dr Rosemary Brown (Fast Start)
The neurobiology of maternal behaviour - dissecting the role of prolactin in the medial preoptic area
$300,000
Parental care is critical for the survival of dependent offspring, with maternal care being the predominant form of care in mammals. The brain’s medial preoptic area (MPOA) is central to coordinating changes in how a mother behaves towards offspring. I recently observed a critical role of the anterior-pituitary hormone, prolactin, in regulating the MPOA during lactation, with mothers lacking prolactin receptors (Prlr) specifically in this region abandoning their pups soon after birth. These data provide the first evidence that prolactin action in the MPOA is essential for normal postpartum behavior. Here, I will use our established genetic techniques to target prolactin-responsive neurons in the MPOA during pregnancy and lactation, and measure their activity with calcium imaging, measure their gene expression in these different conditions, and manipulate their activity using chemogenetics. This will greatly contribute to understanding how hormones act in the brain to regulate behaviour.

Dr Charlotte King (Fast Start)
Planting the Soil and Panning for Gold: Exploring the dynamics of colonial life in Otago
$300,000
Processes of immigration are central to New Zealand national identity and were as important in the past as they are today. The first European settlers flocked to Otago to begin new lives as farmers, leaders of industry or to strike it rich in the goldfields. These people’s individual stories are largely missing from the historical record, which tends to gloss over them in favour of creating state-sponsored narratives. Following the recent excavation of the historic cemetery site of St John’s Milton, however, it is now possible to reconstruct the lives of these early southern European settlers using bioarchaeological techniques. For the first time in New Zealand, cutting-edge isotopic techniques will be applied to settler remains to track changes in mobility, diet and health through their lives. In doing so this project will evaluate whether these first European New Zealanders achieved the better lives they left their homelands for. It will compare the biological histories of the settlers with the historical record in Europe and New Zealand to build a holistic picture of processes of empire-building, adaptation and what it means to be a Pākehā New Zealander.

Dr Michael Knapp
TB or not TB - examining the origin and evolution of tuberculosis in the pre-European Pacific
$920,000
The origin and antiquity of tuberculosis (TB) in the Pacific is controversial. TB-causing Mycobacterium tuberculosis complex (MTBC) bacteria are thought to have arrived with European sailors or settlers but TB-like lesions in pre-European skeletal remains from across the Pacific contradict this popular view. We will combine palaeogenetic and macroscopic analyses of pre-European human and animal remains to determine how TB arrived and evolved in the Pacific. This study has the potential to fundamentally alter our understanding of how TB spread around the world and to provide new insights into how MTBC bacteria adapt to human hosts and alter their potential for causing epidemics.

Dr Megan Wilson
Understanding the cellular and molecular drivers governing a unique whole body regeneration phenomenon in a chordate model
$820,000
Regeneration is a basic biological phenomenon that involves a complex temporal and spatial
interplay of molecular signalling cascades, cell divisions, chemical and mechanical stimuli.
However, the nature of signals that instigate the process of regeneration and the biology of effector cells remain elusive. A striking example of regeneration is the process of whole body regeneration phenomenon in Botrylloides, where a fully functional adult regenerates in under two weeks from isolated minute fragments of blood vessels. Our research programme will combine cell-tracing, gene editing and genomics methods to determine the molecular and cellular basis of regeneration in this amazing animal.