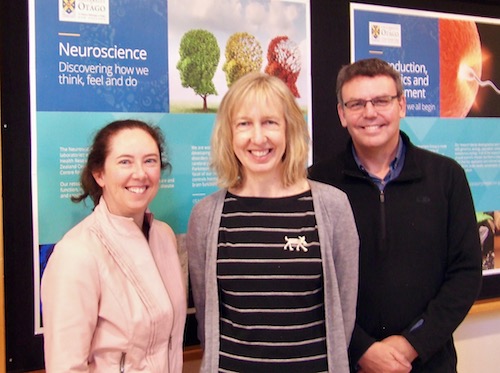 Over $800,000 from Brain Research New Zealand (BRNZ) Rangahau Roro Aotearoa has been awarded to four researchers in the Department. The five Project and Explorer grants will support and help develop new research in the Department in the areas of brain stimulation, Alzheimer’s disease and Parkinson’s disease.

The announcement of the grants continues a period of outstanding success for the Department with recent achievements in funding and Fellowships from the Marsden Fund, Health Research Council, and the Royal Society.

Alzheimer’s disease (AD) is the most common form of dementia. Its long preclinical and prodromal phases offer a great window of opportunity for therapies to be administered early in the disease. It is however vital to have molecules (biomarkers) available that can help diagnose AD early. Metabolomics is a powerful tool that studies perturbations in the metabolomes, which represents an accurate biochemical phenotype of the organism in health and disease. The proposed project aims to explore and validate the blood and cerebrospinal fluid biomarkers centered on L-arginine metabolism for the diagnosis and prognosis of AD via a targeted metabolomics approach.

Together with staff at the University of Auckland, the team will combine their expertise in wireless power and light delivery with implantable-grade glass packaging technology to create the first practical optogenetics implant for clinical use. The project will quantify the light penetration in the brain achieved by the new device. This is a critical step before determining if the device can be used to recover movements in parkinsonian rats.

The aim of the project is to understand Māori perceptions to neurosurgery and brain stimulation techniques to treat neurological conditions, or following acute trauma. The team will explore situations when neurosurgery and brain stimulation techniques are consistent or discordant with tikanga or Te Ao Māori, and document current and historical strategies used by Māori communities to treat brain trauma or neurological diseases.

Professor John Reynolds - $80,000 (Large project, part funded as an Explorer grant)
“Failure of the habit system as a biomarker of Parkinson’s disease”

The aim is to determine a behavioural measure of the presence of loss of habitual behaviour, which is thought to occur in people with Parkinson’s disease (PD). The research team will validate the measure in people with PD who are very early and determine if this correlates with their arm function. We will also look at the side of their body that is not yet showing symptoms and see if our marker still confirms the loss of habitual behaviour, thereby acting as a predictor of future Parkinson’s symptoms.

In collaboration with Professor Ralph Martins, Macquarie University, the research project will aim to discover a microRNA signature which reflects increased amyloid-beta load in the brain prior to cognitive decline and is associated with a high risk of developing dementia. The key strengths and excellence of our approach is that we will use (i) a large and well-characterised cohort, recruited by Professor Martins, (ii) an established in-house custom-designed microRNA screening tool which focuses on microRNA that are robustly detected in plasma and therefore are likely to be informative as markers of amyloidosis, and (iii) established expertise in bioinformatics and statistics to rapidly process and integrate the microRNA and clinical data.