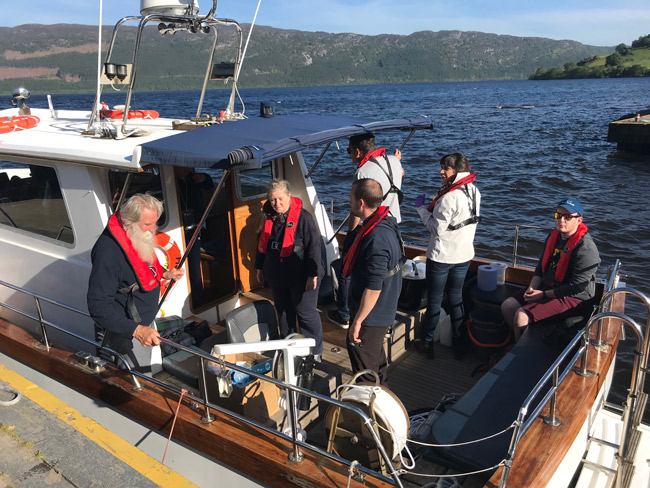 The Loch Ness Hunters on board a boat on Scotland's Loch Ness, ready to begin their search for potential DNA clues of "Nessie". 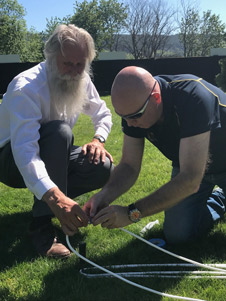 Professor Neil Gemmell (right) and Adrian Shine of the Loch Ness Project prepare rope to take samples at 200m depths in the loch.

Otago’s Professor Neil Gemmell is now in Scotland, with teams of international media waiting to follow his every move.

The Department of Anatomy’s Professor Gemmell, who holds the University’s Chair for Reproduction and Genomics, is in Scotland to sample the environmental DNA in Loch Ness – and in so doing, check whether the DNA of a possible monster, “Nessie”, might also be waiting there for discovery.

So far, the story has attracted more than 2,200 online media mentions, with a potential reach of more than 1 billion readers in more than 50 countries.

Some of the key media outlets to feature the story include Yahoo!, Time Magazine, National Geographic, ABC News, the New York Post, CBS News, BBC News, and The Huffington Post.

The unprecedented level of media interest makes the project the single biggest research-based story to come out of the University in recent memory.

Professor Gemmell describes the pick-up in interest as a “boom”.

“It just went crazy,” he says.

While his passion is the science, he believes the story has captured global attention because of the site itself – Loch Ness and the legend of its inhabitant – Nessie.

And while he does not personally believe in Nessie, he can understand why people are drawn to mythical creatures and remains open minded about what the team may find.

"Whenever a creature moves through its environment, it leaves behind tiny fragments of DNA from skin, scales, feathers, fur, faeces and urine. This DNA can be captured, sequenced and then used to identify that creature..."

He is leading a group of global scientists using environmental DNA (eDNA) to sample the waters to identify tiny DNA remnants left behind by life in the loch.

They will then establish a detailed list of all life living in Loch Ness, potentially including those from a large extinct marine reptile, and make comparisons between it and several other lochs to find how Loch Ness differs from other sites.

“Whenever a creature moves through its environment, it leaves behind tiny fragments of DNA from skin, scales, feathers, fur, faeces and urine. This DNA can be captured, sequenced and then used to identify that creature by comparing the sequence obtained to large databases of known genetic sequences from 100,000’s of different organisms – if an exact match can’t be found we can generally figure out where on the tree of life that sequence fits,” he says.

Once the sampling is complete, the DNA will be extracted in labs in Europe before gene sequences are analysed in Europe, Australia and here at Otago. Findings are expected to be released in January 2019.

For more information about the project, visit www.lochnesshunters.com

Professor Gemmell spoke to Otago's media team before he left for Scotland - take a look at what he had to say in the video below: