Opinion: From Otago to Loch Ness

The tale has got it all – cutting edge technology, a mysterious creature, international participants, and the media spotlight. Otago’s Professor Neil Gemmell reflects on his now famous investigation, two years in the making; the Loch Ness eDNA project. 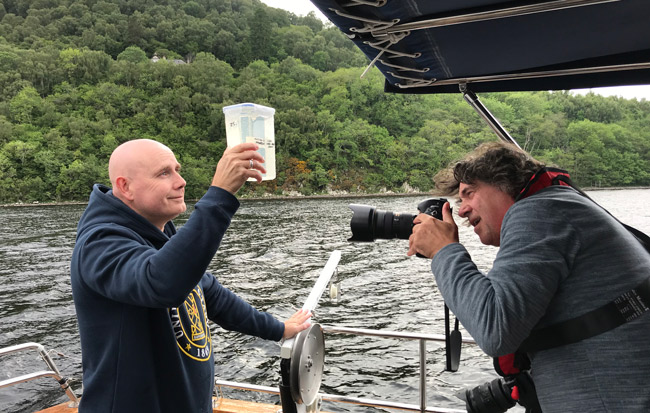 Professor Neil Gemmell with a sample collected from Loch Ness this month.

One of the things I love about my career in science is the freedom it allows to explore my academic curiosities. These are many and varied, spanning the molecular basis of natural sex change in fish, to the mechanisms through which parasites can hijack the behaviour of their insect hosts.

Some would consider these interests quirky, but they look reasonably tame in comparison to my latest venture which gained international media attention – using environmental DNA (eDNA) to document life in Loch Ness.

The premise behind eDNA is simple – life is messy. Living things leave behind skin, hair, feathers, poo, urine, bark, pollen and spores as part of their day-to-day activities. These traces result in a veritable potpourri of organic material in our soil and water from which DNA can be extracted and sequenced to obtain a census of life at a given place, at a given time.

"Pursuing this project posed potential risk to my scientific reputation, with some colleagues suggesting the idea might be a career killer. I therefore might well have walked away and said “interesting idea, someone will eventually do this, but it won’t be me”."

Environmental DNA is reasonably new so still has some form of novelty. But, when you link eDNA’s power to document life in a given system with the world’s most famous body of water – reputedly home to a “monster” – people really take notice.

Obviously, the hook here is that if Nessie is present in the deep, dark and mysterious waters of Loch Ness (for the record I am not a believer, but open to being wrong) then we might find DNA sequences that will help us figure out the biological basis for the more than 1000 registered sightings of the monster (including two in the last month).

As I write, we have just finished two weeks of field work for this project, and we now have 259 filtered water samples in the fridge collected from various parts of the loch, including its chilly depths, more than 200 metres down.

But, before I move on to tell you what happens next with these samples, it might be useful to run through how this all came about in the first place, what has happened and my thoughts and experiences thus far.

About two years ago Darren Naish had just published a book Hunting Monsters, which included a chapter on Loch Ness. Over a tweet or two I asked him if, in his research for the book, he had stumbled on anyone that was using eDNA to search for evidence of Nessie. The answer was no, but we both thought it a splendid idea.

I had asked the question because I was becoming increasingly enamoured with the power of eDNA as a means to monitor the natural environment. Our team at the University of Otago had just completed a piece of work which demonstrated amazing accuracy at identifying the species that resided in the marine ecosystems we studied. 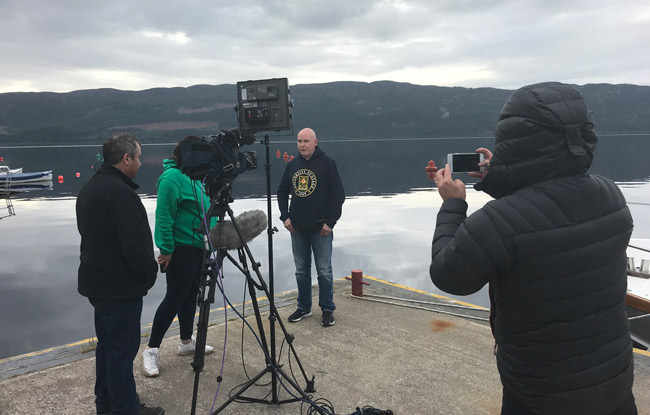 One of a multitude of media interviews on the shores of Loch Ness.

Based on this, I was already thinking about how we might use eDNA to search for and identify the creatures that live in areas of our planet which are hard to investigate using traditional approaches – deep oceans, subterranean water systems and the like. Loch Ness seemed a perfect fit for that sort of project.

As with many science ideas, that tweet ended up going into the “this is quite interesting” basket and there it sat until I got an email from John Paul Breslin, a reporter with Scotland’s The Sunday Post.

John had been researching Darren’s work and stumbled upon our tweets. With his journalistic interests piqued, he asked me if we had actually gone ahead with the idea. Based on my response to that, and several other questions, he wrote an article that appeared online very close to 1 April 2017. Some may initially have taken this as a bit of a leg pull, but the story rapidly spread from Scotland to the rest of the world.

The media interest at that point was somewhat overwhelming when we literally had done nothing more than put forward an idea. However, as the interview requests came pouring in, I was very aware that we had a unique opportunity to turn this idea into a reality. However, was this what I wanted to do?

At the time I was the head of a very large and successful department at a well-respected university, with an international reputation for doing quality work in the areas of molecular ecology and evolution. Pursuing this project posed potential risk to my scientific reputation, with some colleagues suggesting the idea might be a career killer. I therefore might well have walked away and said “interesting idea, someone will eventually do this, but it won’t be me”.

"... because of the astonishing level of interest in Loch Ness, this project would also provide opportunities to communicate the power of the latest DNA technologies and the scientific process to a general audience the likes of which I had never before achieved. ."

The turning point for me arrived the morning after the initial media flurry in New Zealand. Dropping my son off at school I was surprised to have a large posse of 8- and 9-year-olds telling me that they had seen me in the local paper and on TV. Given their obvious interest I asked them what they thought of the idea of hunting for the Loch Ness monster using new DNA approaches. The answer “we think this is the coolest thing ever” resonated with me. This was cool, it was fun, and it was a magnificent opportunity to engage the public, particularly kids, in the scientific process.

I decided then that, yes, we would make this happen, but we would use the monster as the bait and science as the hook.

The plan was for the project to have the appearance of a monster hunt, capturing the spirit of adventure and excitement of such initiatives, but to also have the credibility and integrity of the science at its core.

In essence it would be a straight up biodiversity survey using eDNA tools, albeit on one of the world’s most famous bodies of water. But, because of the astonishing level of interest in Loch Ness, this project would also provide opportunities to communicate the power of the latest DNA technologies and the scientific process to a general audience the likes of which I had never before achieved.

Armed with a plan I started to contact people who I thought would be interested in the project as potential collaborators.

One of the first stops was naturalist and Loch Ness expert, Adrian Shine. Adrian initially thought this was some kind of belated April Fool’s joke, but quickly warmed to the idea of using eDNA to understand the loch, and in so doing perhaps shine a new light on the monster myth.

Adrian had dragged and dredged Loch Ness many times with nets and other devices, spending many hours sorting through diatoms, insects, fish and other species to document the life of the loch. He liked the “elegance” of the eDNA approach, where the sampling of water was relatively easy, compared to the meticulous and time-consuming work that would be undertaken in labs.

On the basis of a Skype call, Adrian offered his support and that of the Loch Ness Centre and Project, which would provide a boat and skipper.

The game was afoot.

Following Adrian I contacted a number of other colleagues who all agreed to join the project. Our team has grown steadily over time as we have discovered that our Loch Ness hunt will not only describe the biodiversity of Loch Ness in unprecedented fashion, but also adds value to ongoing efforts to document the fish biodiversity of the UK’s lakes and rivers, led by the University of Hull, as well as a new project initiated by the University of the Highlands and Islands that seeks to understand the movements of migratory fish species such as salmon, eels and lamprey. 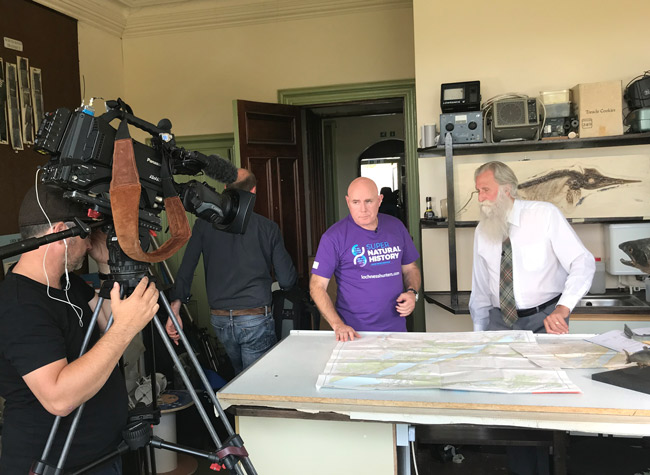 Further, our work will provide important baseline data from which new insights into the impact of climate change and invasive species will likely emerge.

So, our project is not a simple monster hunt (although wouldn’t it be amazing if we did find something extraordinary during our investigation). Rather it is an amalgam of basic science, linked to major current UK initiatives, with a strong science communication narrative that has captured hearts and minds globally.

While we initially thought we might crowdfund this work, resourcing has not been a major sticking point. Each of our collaborators has given time and resources to the project and we have also received significant industry support from the likes of DNA sequencing suppliers Qiagen and Illumina.

Fast forward through a lot of planning and logistics, and on 2 June 2018, we found ourselves at Loch Ness ready to go.

Delays of both the transport and courier variety meant that it was really 5 June before we had everyone and everything we needed, but this gave us opportunities to experiment and refine our approach.

"Our project was also hard on equipment – we broke two of our three sampling devices deploying to depth. Thank goodness plan C worked without fail as we had no plan D."

Miraculously, for the Highlands, the wind stayed light and the rain stayed away which meant we were able to send teams out to sample right around Loch Ness by car and small boat, as well as several nearby lochs as controls. In the evenings we used the Loch Ness Centre boat to sample up and down Loch Ness, particularly targeting the deep water, down to 200 metres.

Our days were long, frequently starting as early as 6am and finishing as late as midnight. Sampling at depth, in particular, is physical and time consuming work taking 20 minutes or so to collect each sample. Likewise the filtering of the samples took about 7 minutes, tallying roughly 30 hours of continuous work for the 259 we collected. Thank goodness we had many hands to make the workload lighter.

Our project was also hard on equipment – we broke two of our three sampling devices deploying to depth. Thank goodness plan C worked without fail as we had no plan D. I also learned the saying “this is going well” is sure to augur some form of equipment failure so have learnt to keep my thoughts on project trajectory to myself.

Interspaced among all the sampling were a host of media interviews (TV, radio, print), discussion with multiple production houses about potential documentaries and a raft of other commitments. It was a lot of work, but given one of our key goals was to communicate our science, the attention, while exhausting, was welcome.

Now, with sample collection behind us, we are onto the next phase of work.

The DNA from the samples is currently being extracted at the University of Hull. From there it will go to the Laboratoire D’Ecologie Alpine, in Grenoble, where it will be metabarcoded and sequenced.

What resides in our samples? Well undoubtedly there will be DNA sequences derived from bacteria, protists, algae, invertebrates, and the traces of the fish, birds and other vertebrate life known from the loch. Is there anything else, perhaps something unusual, such as a giant catfish, sturgeon or eel, or a species unknown to science? It seems unlikely, but who knows.

For more information about the project, the science, and the team, visit www.lochnesshunters.com.