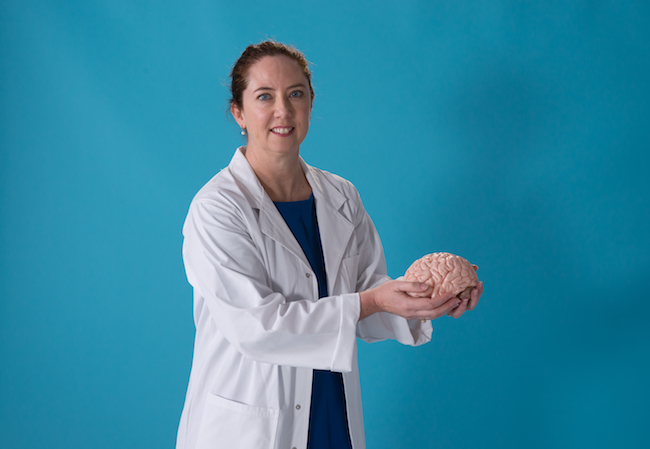 If Dr Louise Parr-Brownlie’s face seems familiar to you, it’s probably because you’ve seen her on TV, or in the newspaper, or on the back of a bus.

She is one of four scientists chosen by the Neurological Foundation of New Zealand to front their latest advertising campaign “How Healthy is your Supramarginal Gyrus?”

The supramarginal gyrus is the part of the brain associated with kindness and generosity.

Louise needed to meet several criteria, which included an interview with a media agency, before being selected for the campaign. Once selected, she travelled to Auckland for filming.

She says it was quite an interesting experience.

“I needed to take three blue outfits with me which I would normally wear to work. The makeup person selected the one I was to wear for the filming.”

After having her hair and makeup professionally done, the actual filming only took about an hour.

“They started with the far away action shots and then some very, very close ones focusing on my face and hands. And finally, they took still shots for print media.”

Louise says she enjoyed the experience but was happy to be back in the familiar surroundings of her research lab the next day. Louise’s research focuses on Parkinson’s disease.

The Neurological Foundation of New Zealand provides funding to researchers and postgraduate students through scholarships, fellowships, and project grants.

Louise’s lab has received several large project grants from the Foundation, and one of her students received a summer scholarship which enabled them to undertake research during the summer break.

The advertising campaign will run for at least three years.