Kakī for Bird of the Year, urges Otago postgraduate 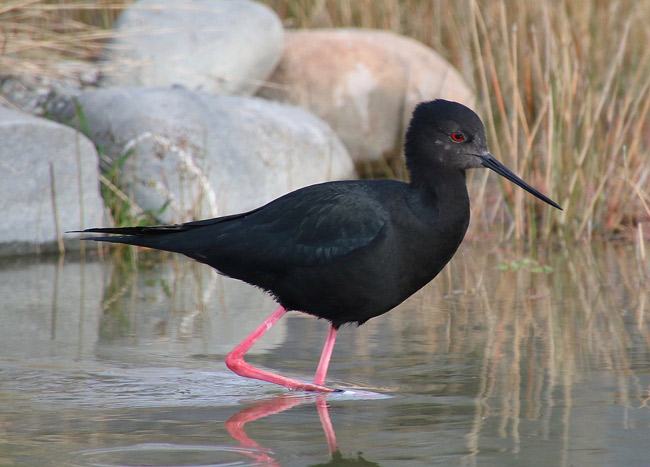 The Kakī, or Black Stilt - this year's New Zealand Bird of the Year? Perhaps - with your support. Photo: Stephanie Galla. 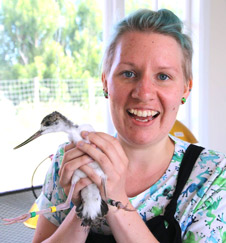 An Otago PhD student is putting her weight behind a campaign to make the one of the rarest birds in the world, the Kakī, or Black Stilt, New Zealand’s 2018 Bird of the Year.

The kakī is a wading bird with its population primarily limited to the Mackenzie Basin, near Aoraki Mt Cook, and is slowly recovering after declining to just 23 adults in 1981.

Natalie Forsdick is undertaking her PhD in the Department of Anatomy, investigating the use of genetic tools to assist in management of threatened species.

She says that although their ‘back from the brink’ story is one of the most extreme, very few people have heard of kakī, and even fewer have seen them.

“Kakī were once widespread across New Zealand, but due to invasive predators and habitat modification and loss, they began to decline following human arrival. By 1981 they were right on the point of no return.”

Natalie is co-managing the Bird of the Year campaign for kakī, with Stephanie Galla, a fellow PhD student at the University of Canterbury.

Bird of the Year is an annual competition run by Forest and Bird as a way to raise awareness for New Zealand’s unique birdlife, with volunteers campaigning via social media for their favourite birds to win. This year it will run from 1 to 15 October.

"While many critically endangered species like kākāpō are well-known, kakī aren’t as eye-catching, and suffer from a lack of public awareness, even though they have a smaller population."

“We are using the Bird of the Year campaign as a way to raise awareness for this critically endangered bird,” she says.

“We have both been involved with various outreach projects for kakī conservation, and see this as a way to reach out to New Zealand as a whole. By giving kakī the spotlight, we hope to raise awareness for the importance of conservation work, and the special braided river ecology of Te Manahuna/the Mackenzie Basin, which often looks brown and drab, but is essential habitat to rare, unique critters such as kakī, wrybill/ngutuparore, and robust grasshopper.”

The kakī population has grown to 132 wild adults thanks to an intensive management programme run by the Department of Conservation in Twizel, involving predator and weed management in the Mackenzie River systems, and a programme of captive breeding for release.

Natalie says while this is great progress, kakī aren’t out of the woods yet.

“While many critically endangered species like kākāpō are well-known, kakī aren’t as eye-catching, and suffer from a lack of public awareness, even though they have a smaller population. I feel they should be known as New Zealand’s favourite all blacks!”

The campaign has been going for the past two years, with a steady increase in votes but no result. However Natalie says this is the kakī’s year.

She hopes Otago staff and students will get behind the bid.

Natalie's genetics research backs up the conservation work she does in her spare time.

"I’m particularly interested in whether this introgression has affected kakī, and if so, what the incorporation of genetic material from poaka may mean to the modern kakī population."

“Genetics play an important role because most threatened species with small populations have lost genetic diversity, making them less able to adapt to future change, and are at risk of inbreeding (breeding between close relatives) and its negative impacts on fitness such as reduced fertility,” she explains.

For her PhD project, she is looking at another genetic factor that can negatively impact threatened species – that of hybridisation.

“When the kakī population has been very small, they have interbred with a different species, the poaka (pied stilt),” she says.

“Hybridisation can represent a waste of resources that would be put to better use producing new kakī. It may also lead to genetic material from one species moving into the gene pool of the other species.

“I’m particularly interested in whether this introgression has affected kakī, and if so, what the incorporation of genetic material from poaka may mean to the modern kakī population.”