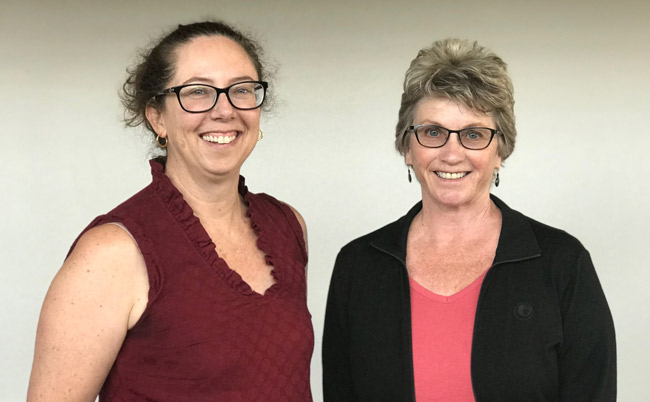 Two women, both from the University of Otago, have been appointed to lead the Ageing Well National Science Challenge (AWNSC) in a year when it moves into the second phase of its allocation of funding.

Associate Professor Debra Waters, Director of Gerontology Research, has been appointed Director, and Dr Louise Parr-Brownlie (Ngāti Maniapoto me Te Arawa), a Senior Lecturer in the Department of Anatomy, is Co-Director (Māori).

Associate Professor Waters says it’s an exciting time to take over the leadership, with the University of Otago-hosted AWNSC half way through its first 10 years of funding.

" ... instead of competing with each other, institutions and researchers are getting together, they’re working with the people affected, and they’re putting together plans for research that is real, measurable and that impacts."

All up, AWNSC is charged with allocating more than $35 million towards maintaining health and well-being for New Zealanders into the latter years of life. It is anticipated that this research will influence policy and practice to support ageing well.

In its first five years it allocated $14.6 million and, after a mid-way review last year, the Ministry of Business, Innovation and Employment (MBIE) endorsed the release of the remaining $20.3 million for the next five years of research.

Both new leaders are embracing the opportunity to be closely involved in supporting initatives aimed at older New Zealanders.

Associate Professor Waters says New Zealand’s ageing population means that by 2051 it’s predicted there will be 1.22 million people aged 65-plus. That will be almost a quarter of the population, compared with 11 per cent aged 65-plus in 2001.

“The predicted growth of our ageing population will have significant planning implications and we need evidence-based research informing the planning.

“The thing that’s different about these Challenges is that they’re trying to break down the silos between the different institutions and researchers. The research is multi-disciplinary and multi-institutional with engagement and involvement of stakeholders and underpinned by Vision Mātauranga.

“So instead of competing with each other, intitutions and researchers are getting together, they’re working with the people affected, and they’re putting together plans for research that is real, measurable and that impacts."

As the AWNSC moves into its second phase, it is planning to allocate funding later this year to two broad programmes based around the themes of '

Health and Wellbeing in Ageing' and 'Ageing and Māori'. Each programme will be the umbrella for a series of integrated research projects relating to its theme.

"We know, like in all ethnicities, that some people age well and some not so well. So learning from those people who are ageing well and who are Māori will be important."

Dr Parr-Brownlie says the Ageing and Māori theme addresses a recognised need for specific programmes of research that look at issues important to Māori and about $7 million is available for this purpose. Some will be allocated to enhance work already done in the first phase of AWNSC but the majority will go to an inter-related, multi-disciplinary, mutli-institutional research programme.

Dr Parr-Brownlie joined AWNSC as Deputy Director midway through last year and will lead the evolution of the Ageing and Māori portfolio.

“We have already indicated some key priorities.

“We know, like in all ethnicities, that some people age well and some not so well. So learning from those people who are ageing well and who are Māori will be important.

“Life course and inter-generational perspectives will also be important.”

Both say it’s siginficiant that women, one of them Māori, are leading a National Science Challenge. They say it sends a strong signal that diversity and equity are valued and are essential features to ensure that “we add life to years for all older New Zealanders”.

The Ageing Well National Science Challenge is one of 11 National Science Challenges which are cross-disciplinary, science-led programmes designed to tackle the biggest science-based challenges New Zealand has. They provide an opportunity for collaboration between researchers from universities and other academic institutions, Crown Research Institutes, business and non-government organisations to create sustainable and long-term research plans and activities.