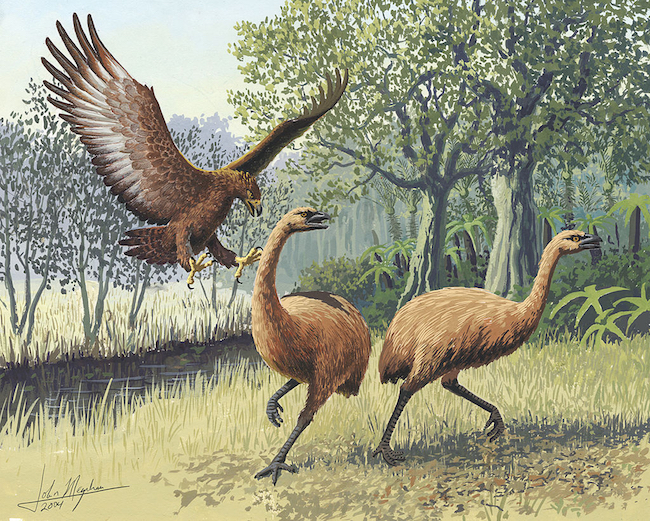 An international team of researchers including scientists from the University of Otago and Canterbury Museum has brought new knowledge around how the world’s largest eagle came to live in New Zealand. The study published this week in Molecular Phylogenetics and Evolution traces the Haast’s eagle back to Australia, but it was only after more than two million years of evolution in New Zealand that the bird became a global giant.

Scientists have long viewed New Zealand as a Moa’s Ark, a landmass that had been isolated since the age of the dinosaurs, protecting its unique fauna and flora from the rest of the world. While that paradigm has been shown to be incorrect, the giant birds of prey, Haast’s eagle and Eyles’ harrier that called New Zealand home prior to their extinction shortly after human arrival, certainly helped to establish the picture of a primeval archipelago, lost in time.

At the top of the food chain in New Zealand, Haast's eagle, the largest eagle in the world with a wing span of three metres and a weight of up to 15 kilograms, and Eyles' harrier, the largest harrier in the world (wingspan two metres, 3.5kg), had filled ecological niches that are on other landmasses occupied by animals such as large cats or canines. Until now, the evolutionary and biogeographic history of these island giants had long been a mystery.

The first molecular data from Haast’s eagle, which was published more than a decade ago, gave a first indication that things may be a bit more complex than they seemed. 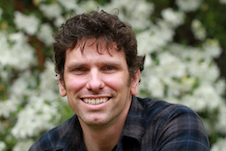 “This molecular data suggested that Haast’s eagle was not closely related to other large eagles, like the Australian wedge-tailed eagle, but was in fact a close relative of the comparatively tiny, 1kg Australian little eagle, one of the smallest eagles in world,” says lead researcher Dr Michael Knapp, of the University of Otago’s Department of Anatomy.

To add to the surprise, the molecular dataset indicated that genetically, at least for the very small subset of the genome that was analysed, Haast’s eagle was not very different from the little eagle. In fact they seemed to share a common ancestor sometime during the ice ages, a period of alternating cold and warm times which started about 2.5 million years ago and which we are likely still in today.

“The initial estimate for a common ancestor of Haast’s eagle and little eagle was about a million years ago. On an evolutionary time scale, that is essentially yesterday,” adds Dr Knapp.

The new study out of the University of Otago analysed a significantly larger part of Haast’s eagle’s genome and is also the very first molecular analyses of Eyles’ harrier.

For Haast’s eagle, the study essentially confirms the earlier work, although the bigger dataset puts the age of the common ancestor of the Australian dwarf and the New Zealand giant closer to 2.3–2.5 million years ago, at the very beginning of the ice ages. Curiously, though, the study found exactly the same story for Eyles’ harrier. Its closest relative, as it turns out, is the small to medium sized Australian spotted harrier, and they share a common ancestor at almost exactly the same time as the eagles.

“2.5 million years is not long in evolutionary terms. It’s certainly a much shorter time frame than was originally thought.

“These results fit into a broader trend in our field, where we’re increasingly finding that species we see as iconic New Zealand species actually haven’t been here that long.” 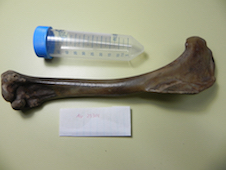 The spectacular size increase of New Zealand’s birds of prey is likely a result of them essentially 'climbing up' the food chain after arriving in New Zealand. In Australia, large marsupials were the top predators, with eagles and harriers likely targeting only small animals. In New Zealand, there was no top predator that would for example hunt giant moa or even medium size birds such as pigeons and kaka, so the eagles and harriers adapted and filled those niches. But a one kg bird would have difficulties killing large moa. So the larger the bird, the more successful it would have hunted and produced offspring, eventually leading to the now iconic giant size of Haast’s eagle and Eyles' harrier.

So, are New Zealand’s iconic birds of prey just Australians in disguise?

“They certainly still have very close relatives across the ditch, but one could argue that the ancestors of Haast’s eagle and Eyles' harrier chose to leave Australia for New Zealand, and that New Zealand made them the special birds they were,” Dr Knapp adds.