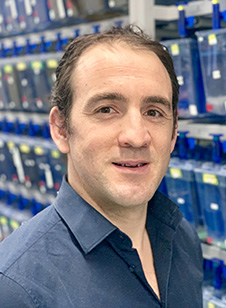 That progress has led to him being announced as one of this year’s University of Otago Early Career Award for Distinction in Research winners.

Brought up on a Maniototo farm, Dr Hore completed secondary school and his undergraduate degree in Dunedin. His PhD, completed in 2008 at the Australian National University in Canberra, was in the rapidly evolving field of epigenetics.

Further progress beckoned, and he moved to Cambridge, England, for his post-doctoral research. While there, he and his colleagues were able to prove that removing DNA methylation (an essential part of normal development in mammals; associated with ageing, genomic imprinting and cancer) helped cells turn into an embryonic-like state.

These interests have continued back in Dunedin, where he set up his own epigenetics laboratory in the Department of Anatomy in 2015.

While the term “epigenetics” may not be mainstream yet, it is quickly growing in scientific importance. During the last few decades scientists have realised DNA is more than just its sequence, Dr Hore explains.

“Epigenetic modifications are tiny chemical changes to DNA that act like little signposts instructing cellular machinery what to do. It’s really important for development and helping the early stem cells of the body decide what job they should perform.

“It’s also really important for helping cells remember that job over an entire lifetime. The particular form of epigenetic modification I am interested in, DNA methylation, is particularly related to long term memory.”

It is research into this that his laboratory team is focusing on, as they try to progress understanding in inherited memories.

“We’re trying to understand if the information held by DNA methylation can be inherited. Others have shown that, in humans and mice, DNA methylation inheritance is very rare because it gets erased at each generation.

“However, we have found that in at least one species of fish this epigenetic memory is not erased, meaning life experience could be transmitted to offspring in a much more prevalent way. We’re now working hard to test if this is actually the case. If it is, it could change the way we think about the ‘book-of-life’ and how it is passed on to offspring.”

It is tantalising promises of ongoing discovery like this that drive Dr Hore’s research, he says.

Dr Hore says receiving the Early Career Award for Distinction in Research not only acknowledges his team’s research, it also reflects “on all those who have contributed to it – collaborators internationally, research support staff in the Anatomy department and across the University, as well as keen students and researchers”.