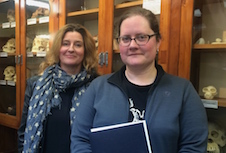 Monica Tromp’s PhD Thesis, entitled Lapita plants, people and pigs, has been placed on the University of Otago’s Health Sciences Divisional List of Exceptional Doctoral theses, after it was deemed to be of exceptional standard by the panel of examiners. The three experienced examiners graded it among the top 10% of theses they had examined.

Monica received unanimous support from her examiners for the quality of the research content, originality, quality of expression and the accuracy of the presentation of her research. The Convenor of Examiners said the examiners described the thesis as “leading edge research” and commented that “it has led to new directions in methodology” and provided “a new viewpoint on early Pacific diet”.

Monica’s research looked at the relationship between Lapita and immediately post-Lapita people and their plants.

Results showed the Lapita and post-Lapita people had a more diverse plant diet than previously thought. Novel results show the transference of non-indigenous plants at some sites, providing evidence for the concept of a “transported landscape”. Many of the plants identified suggest that colonies were more reliant than previous assumed on forest resources.

Monica will shortly take up the position of Postdoctoral Fellow in the Department of Archaeology at the Max Planck Institute for the Science of Human History, in Jena, Germany.

Visit the Division of Health Sciences list of exceptional theses.

Below is an extract from the Thesis Abstract …

The Lapita cultural complex is associated with the Austronesian expansion out of Island Southeast Asia beginning approximately 3,500 BP. Sites associated with this archaeological culture have been found from the coast of New Guinea in Near Oceania and out past the Solomon Islands into Remote Oceania as far south as New Caledonia and as far east as Samoa by 2,700 BP. Major components of this culture include the commensal animals and horticultural plants that were transported with them as a portable subsistence economy during their voyaging. The commensal animal component of this package is reasonably well established, but the plant portion is less clear. This is primarily due to the scarcity of plant macro remains that have been found from archaeological sites and the lack of specificity of actual foods consumed in stable isotope analyses of archaeological human and animal bone. One direct way to explore the dietary plant component is to identify micro particles of plants (microfossils) that have been trapped within calcified plaque (dental calculus).

The primary aim of this thesis is to examine the relationship between Lapita and immediately post-Lapita people and plants. The secondary aim is to examine whether human and commensal pig plant diets are similar and if it is possible to use pig diet as a proxy for human diet when human remains are not available for analysis.To address these aims, microfossils wereextracted from human and pig dental calculus from four different sites: the SAC site on Watom Island, East New Britain Province, Papua NewGuinea; Teouma on Efate Island, and Vao and Uripiv islands off the coast of northeast Malakula in Vanuatu. The samples were examined using a combination of light microscopy and scanning electron microscopy. All of the samples analysed date between Lapita (~3000 cal BP) and post-Lapita (~2500 cal BP)periods. These sites allow for a comparison of 1) an initial colonising population (Teouma) and later populations(Watom, Uripiv and Vao), 2) Near Oceanic (Watom) and Remote Oceanic (Teouma, Uripiv and Vao) sites and 3) the wild versus cultivated plant components of their diets.

The results show a much more diverse plant diet than has previously been shown. The importance of indigenous trees and shrubs to both Lapita and post-Lapita people analysed from all sites has been demonstrated in this study. Novel results include the first instance of banana seed phytoliths outside of the Bismarck Archipelago and an early introduction of Dioscorea esculenta to Vanuatu. The appearance of these non-indigenous plants at Teouma provides support for the concept of a “transported landscape”. However, the majority of identified plants were indigenous tree crops that suggest Lapita colonists were at least partly reliant on the forest resources that already existed on the islands they inhabited. This study represents the first direct plant evidence for Lapita and immediately post-Lapita diet of humans and pigs from this region.