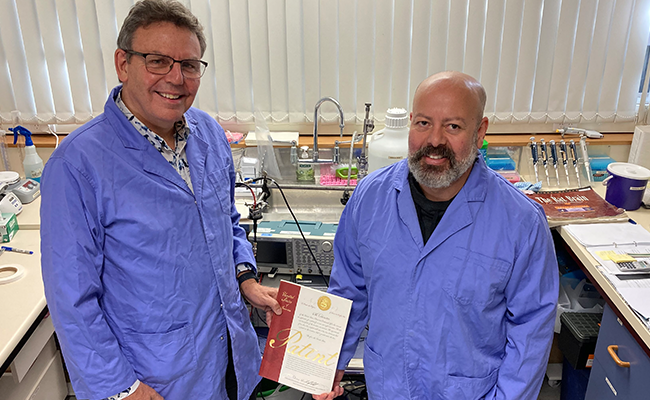 Professor John Reynolds and Tomas Ribeiro with the hard-won US patent.

A University of Otago invention that achieves the “holy grail” of targeted delivery of drugs directly to the brain has been granted a US patent.

Lead investigator Professor John Reynolds described the invention, in development since 2009, as the “pinnacle” of his work.

“It’s so complex. It's taken so many years and we’ve had so many people involved, a combination of many different departments and many different investigators.”

The invention uses a device attached to the head which delivers ultrasonic waves to target drugs to specific brain areas. Otago scientists worked with Dunedin company Kamahi and Callaghan Innovation in Wellington to build the prototype.

“We make the drugs and put them in tiny biological packages which disguises them. And they float around in the bloodstream not doing very much. And when they go through the blood vessels in the brain, we target that area, break the package and the drug does its thing.”

Among the potential applications are the treatment of Parkinson’s disease, epilepsy and brain cancer, where the system can be configured to allow drugs to bypass the brain’s protective mechanisms.

Using targeted therapy to deliver the drugs allows treatment without the side effects that come from drugs interacting with the rest of the body, Professor Reynolds, of the Department of Anatomy, says.

“For example, we've got great drugs for treating cancer, but we just don't have good ways of getting them in the right areas in large enough doses to kill off the tumours and not hurt the rest of you.”

With collaborator Dr Eng Tan, from the Department of Chemistry, the team conceived the idea of using ultrasound to target release of drugs from the liposomes passing through particular brain areas, which led to a significant breakthrough. The rest of the project was more of a steady slog, working carefully through reasoned ideas.

“This is the hardest project I’ve ever been involved in, which is why it's taken so long. All the progress has been incremental,” Professor Reynolds says.

Securing the US patent was also an arduous process, achieved with the help and guidance of Tomas Ribeiro. Tomas is a Business Development Manager at Otago and is also a registered Patent Attorney. Tomas worked on this project with Professor Reynolds when he was at Otago Innovation.

After “a lot of backwards and forwards” with the US Patent Office, Tomas decided to get Professor Reynolds in front of the examiner on a Zoom call to explain the finer details of the invention.
“That really helped us identify the novel and inventive aspects of the patent application and they were quite happy to grant a patent to us.”

A US patent was a major step forward, not only because of the size of the United States market, but because the invention could “piggyback” on the patent in other jurisdictions.

From here, the invention will need more funding and development before going into production, hopefully in the next five to ten years.

“What we can do now is attract investment to commercialise it properly. There's been a couple of great success stories recently in the University that have secured big investments to get things to market,” Tomas says.

“That's where we're at now. Our doors are open and we’re ready.”