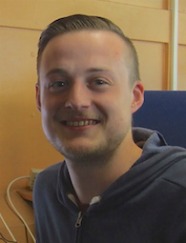 Thirty-one people entered the essay contest, which asked them to explain why their research matters, in a way that would interest a non-scientific audience.

Nikita is a Masters student in the departments of Anatomy and Biochemistry, supervised by Dr Joanna Williams.

Here is his essay:

Helping the fight against Alzheimer’s disease: Beating the bullies

Our memories are what make us who we are – that one summer on the beach when you were six; your first day at high school; your first kiss. Our personalities are a product of our experiences. So what happens when those defining memories are lost? When you can’t remember your partner’s face, or even your own name? This is exactly what happens in Alzheimer’s disease – memories start to fade, it becomes harder to make new memories, planning and organization skills deteriorate and even language and speech are affected. This means that most people affected by Alzheimer’s disease require residential care, their past lives only discernible through their photos around them, shadows of their former selves.

Alzheimer’s disease is a horrendous illness affecting nearly 36 million people worldwide, mostly over the age of 60, and costing over US$600 billion in care costs, according to the World Health Organization. In New Zealand alone the cost to the taxpayer is in excess of NZ$1 billion (Alzheimer’s New Zealand) because of the high level of care required for the 150,000 people suffering from the disease. These numbers will only increase as the global population ages. Currently there is no cure for the disease, or even particularly effective treatments to alleviate the symptoms. Researchers have tried for decades to develop drugs and lifestyle interventions to combat Alzheimer’s, but with little success. The main problem is that we still have a poor understanding of what causes the disease. However, what we have discovered has helped guide the development of potential treatments and new research directions into the causes and progression of the disease.

In very rare cases, Alzheimer’s disease runs in families (only 12 families worldwide) – individuals affected develop Alzheimer’s before their 40s and the symptoms tend to be quite severe. Study of these people have provided a starting point for looking into the cause and development of the disease, and this has led to the identification of genes that are involved, and some of the biological processes that might underlie the more common sporadic cases, with no known common genetic origin.

Research over the last century into Alzheimer’s has highlighted the importance of a protein called Amyloid-Beta, which is a defining feature of the disease. Amyloid-Beta proteins are like the schoolyard bullies - they congregate together in the brain and interfere with the normal working of brain cells, damaging them in the process. The more the disease progresses, the more Amyloid-Beta there is, the more brain cells die, the worse the symptoms get. However, it’s not all bad news - Amyloid-Beta has a cousin called sAPPα, who’s very against bullying. Amyloid-Beta and sAPPα are both derived from the same grandparent protein, but while the former is damaging to brain cells, the latter actually helps protect them - it stands up to the bullies and doesn’t let them get away with it. In our hypothetical schoolyard is another molecule, zinc, which is like a social chameleon. In some cases it hangs out with the Amyloid-Beta, binding onto the protein when it groups together, but at other times it might actually help sAPPα protect brain cells.

My research should shed light on the complex relationship between these molecules in the brain, an area which, while quite extensively explored, lacks clarity and consensus. On top of that, if zinc turns out to be a major player in the brain’s “schoolyard” dynamics, it may also highlight novel treatment strategies for Alzheimer’s. For example, sAPPα therapies are in very early stages of development and if zinc plays a role in regulating its protective function, these therapies may be improved or enhanced by manipulating zinc.

Alzheimer’s is a disease which will impact our lives and the lives of our loved ones, directly or indirectly. This is a very exciting area of research and the possibility of changing millions of lives for the better is as good a reason as any to go down this road.