Can electrical stimulation boost your brain? 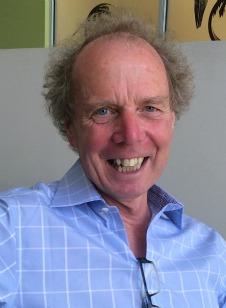 His visit to Dunedin was sponsored by the BHRC, Brain Research New Zealand (BRNZ), and the Neurological Foundation of New Zealand. During his stay he gave both an academic lecture and a public lecture on the topic of transcranial magnetic stimulation.

Transcranial magnetic stimulation (TMS) uses a strong magnet to send a pulse of magnetic energy through the skull. Once in the brain, this magnetic energy induces electrical energy which can be used to stimulate neurons. This stimulation has been shown to improve function in cognition, movement, and memory in a laboratory setting.

About 300 people attended Prof Rothwell‘s hour-long lecture in the Hutton theatre at the Otago Museum. He began his talk with a demonstration of the magnetic power of his transcranial magnetic stimulator, sending a piece of aluminium rocketing toward the ceiling at the press of a button. After demonstrating to the crowd that the large piece of blue plastic he held did in fact do something, he demonstrated how those magnetic waves can affect an active human brain by turning the wand on himself! With the help of an assistant Prof Rothwell showed how stimulation to his right motor cortex caused twitching in his left hand, and vice versa.

So, magnetic stimulation can activate the motor cortex. What can we do with this technology? According to Prof Rothwell it could be used to speed up learning. In an experiment conducted with his research team in London Prof Rothwell tested the average acceleration of a motor task, a specific kind of thumb tapping, over 10 minutes. For participants who hadn’t received any TMS the speed of the tapping was about 1.25x faster after 10 minutes than it was in the beginning. For those participants who had received TMS before the experiment began, acceleration was 1.5x faster after 10 minutes.

This small effect has also be observed in treatments to recover movement after stroke. Patients who received a combination of TMS and physical therapy were shown to improve both faster and to a greater extent after 10 days than patients who had only received the physical therapy.

The motor cortex is not the only area of the brain which can be targeted by this technology. Prof Rothwell also demonstrated, this time on a pre-recorded video, how the disruption caused by TMS can cause word slurring, and so demonstrating that it can reach other areas of the brain.

In his academic lecture to BHRC and BRNZ researchers earlier in the day, Prof Rothwell discussed the possibility of increasing the effectiveness of TMS by using it in conjunction with another form of stimulation: Transcranial Direct Current Stimulation. “The problem with direct current stimulation”, Prof Rothwell said in his evening lecture, “is that it cannot easily move through the skull, so the effects you observe are very, very small”. He demonstrated these small effects by attaching two electrodes to a normal nine volt battery and attaching them behind his ears. When the circuit was completed it triggered what Prof Rothwell called ‘Induced Galvanic Vestibular Stimulation’ which disrupted the balance sensors in his ears. This disruption caused him to feel off balance and step sharply to the side as if to stop himself from falling.

The use of these devices to produce small increases in the learning of motor movements, and restoration after stroke, suggest that this technology could have a wide range of applications. But will we ever have a machine like this in our own homes, or in the office to help us think? Professor Rothwell doesn’t think so. “It’s like a drug,” he said, “if used incorrectly it could do more harm than good.”

While Professor Rothwell stressed that this technology is still in early days, it definitely shows promise in increasing the effectiveness of current treatments for brain injury.