Epilepsy is a condition of recurring seizures – so a single seizure does not mean someone is epileptic. A seizure can be dramatic. A storm of electrical activity in the brain can make them lose consciousness and convulse. But some seizures are more subtle, so-called “absences” for example, where the individual just goes blank for a brief period. The cause of epileptic seizures is often not clear. Seizures can be brought on by many causes, including low blood sugar, infection, medication, head injury, or tumours. But quite often no cause is identified. In some cases, genetic factors may be important. The job of the neurologist is to try to determine the cause and treat the symptoms.

The first step is to decide what kind of seizure it is. Seizures can be focal or generalised, depending on whether the seizure activity in the brain starts in a localised area (focal) or appears simultaneously on both sides of the brain (generalised). We were presented with a list of seizure types, each with their own symptoms and typical presentations.

Most people are familiar with tonic-clonic seizures which cause the muscles of the sufferer’s body to tense, and then jerk rhythmically.

Absence seizures, however, are entirely different. During these seizures the individual appears to have zoned out and goes blank for a period of seconds. While they may not be as physically dangerous as tonic-clonic seizures, absence seizures have their own set of complications. Typically observed in children these seizures can dramatically impact learning and can be hugely disruptive to the sufferer’s life. Associate Professor Hammond-Tooke explained that while these seizures only last for seconds they can occur many times a day,

affecting school work and concentration. In addition to the adverse effects on a child’s learning and social adjustment, there is an increased risk of physical injury if they occur during activities such as swimming or riding a bicycle on the road.

Myoclonic seizures consist of brief muscle jerks, and atonic seizures cause collapse without stiffness or jerking. Both these types are quite uncommon.

Focal seizures can cause subjective symptoms like an abnormal smell or taste, or feelings of déjà vu. Or they can manifest as localised jerking of muscles, without loss of consciousness. Focal seizures can be associated with problems with thinking and response to the environment, so that the person ‘zones out’ and loses some aspects of their cognition, and may not reply to questions. These can look similar to absence seizures, but usually last longer.

A focal seizure starts in a small part of the cerebral cortex, and may remain localised or may spread to the rest of the brain, so that it ends up as as a tonic-clonic seizure. The way the seizure begins gives the clinician a clue about where the focal onset might be. Sometimes a brain scan will show an abnormality in that area, demonstrating an underlying cause of the seizures.

Treatment of epilepsy usually involves regular medication. Some anti-epileptic medications stabilise cell membranes to prevent the spreading of epileptic brain activity, while others act via neurotransmitters and their receptors. Unfortunately medications are not always effective, and about a third of patients continue to have seizures. For some of those patients there are surgical options. If a particular area of the brain is causing seizures, then surgery to remove that area of brain tissue sometimes stops or reduces the seizures.

Developing new and more targeted treatments for epilepsy is crucial, but clinicians cannot do this alone. In order to get a clearer view of what is going wrong and how to treat it doctors must look to researchers. Maintaining communication between researcher and clinician is the key to progress.

Associate Professor Beulah Leitch primarily researches absence epilepsy. It is the most common form of childhood-onset epilepsy, and primarily affects children of school age (4-12 years). The anti-epileptic medications which are currently available fail to control seizures or induce intolerable side effects in approximately a third of patients, and even cause seizures in some cases. So, it is critical to understand what is causing absence seizures, in order to identify new therapeutic targets for treatment. Absence seizures originate from disturbance within part of the brain called the cortico-thalamocortical (CTC) network. There are multiple factors which can go wrong in this network in order to generate an absence seizure, with different cellular and molecular mechanisms present in different patients. This variability in the cause of the seizures would explain the variability in response to drug treatment. 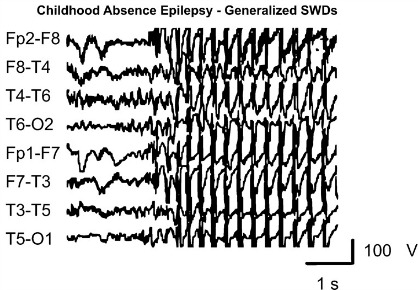 These abnormalities aren’t large; they wouldn’t be clearly visible if you looked at the brain. They are abnormalities in specific microcircuits of the brain and involve changes at “synapses” the contacts between brain cells where they communicate with one another. These changes cause pathological brain oscillations called “spike-wave discharges (SWDs)”, which are the clinical hallmark of absence epilepsy seen on the electroencephalogram (EEG). As you can see in the image to the left these spike-wave discharges are large and hypersynchronous rhythmic firing patterns which continue for a set amount of time before the brain returns to more normal firing patterns.

Several animal models present with SWD profiles similar to human absence epilepsy patients and have provided useful insights into the cellular and molecular mechanisms of absence seizure generation. Associate Professor Leitch and her team were able to determine where communication between brain cells (neurons) breaks down in some forms of absence epilepsy, by examining mouse models of absence epilepsy. They showed that changes at specific synapses in the cortex and a region of the thalamus called the thalamic reticular nucleus (RTN), cause a loss of activation of inhibitory neurons. These neurons provide feed-forward inhibition, which is a built-in mechanism to prevent the spread of runaway excitation in the brain. Loss of feed-forward inhibition can lead to pathological SWD oscillations in some forms of absence epilepsy. 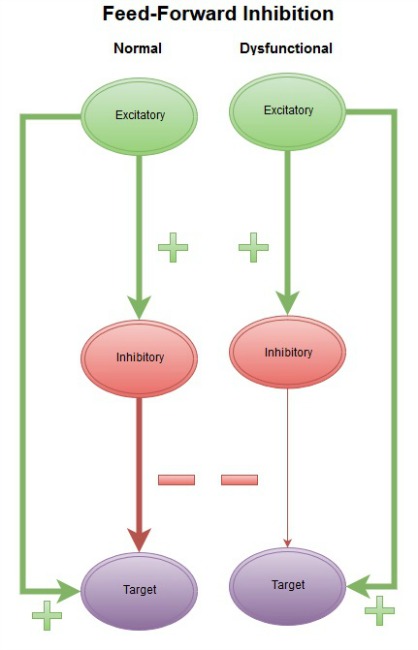 Epilepsy is clearly not a ‘one size fits all problem’. An understanding of cell-specific synaptic mechanisms regulating hyperexcitation and hypersynchronous firing of neurons in the brain could lead to development of targeted interventions that prevent the development of absence seizures which arise from different genetic backgrounds. It is information generated from basic science, which is crucial for improving treatment. In order for the medical community to perform at their best there needs to be communication with researchers, and vice versa, in order to ensure that appropriate treatments get the focus they need.

Epilepsy is a highly disruptive illness which dramatically impacts the lives of those who experience it. With cooperation and open communication the chance of developing more effective treatments increases. We would like to thank both Associate Professor Graeme Hammond-Tooke and Associate Professor Beulah Leitch for taking part in maintaining that communication.