Inflatable Brain in the Whakatane Beacon 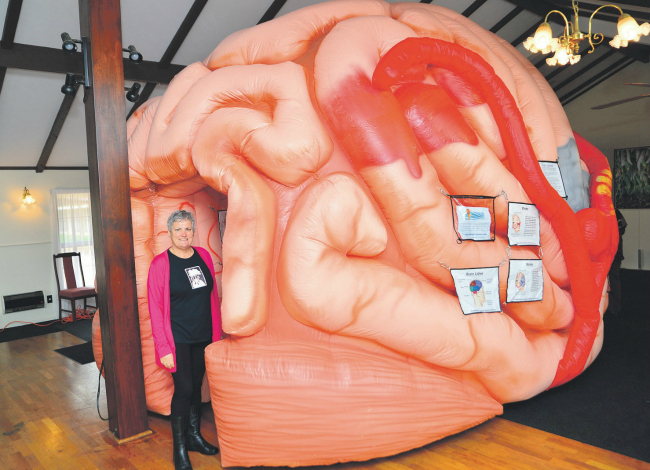 A giant, inflatable, walkthrough brain stimulated minds in Whakatane yesterday. The 3.5-metre tall, 5.5m long inflatable brain provides a highly interactive educational experience that increases understanding of brain health and disease.
The brain was a feature at an Alzheimer’s Eastern Bay Living with Dementia forum, held at Te Whare Wananga o Awanuiarangi yesterday, to raise awareness about the brain and the importance of keeping it healthy. One-hundred people were present, including some affected by a brain disease either directly or indirectly, and tertiary students.
The inflatable brain belongs to the Brain Health Research Centre, based at the University of Otago, and is touring the North Island for the second time. Brain Health Research Centre communications adviser Irene Mosley, who travelled with it, said the inflatable device was used for education and awareness. “It’s very visual and people love it. As far as the rest of our bodies go we know a lot, but the brain isn’t well known.”
University of Auckland Centre for Brain Research associate professor Maurice Curtis was the key note speaker. It was the first time he had seen the inflatable brain and he said it was a good educational tool. Hanging from the giant brain were infographics dealing with subjects such as headaches, aneurisms, functions and exercises. “All of the various points are good for giving people awareness about the brain,” Dr Curtis said. He said the brain was a difficult area to research, read and hear about. Its function served for the entirety of one’s life and if people appreciated that they would look after it better. “Since we don’t have a cure for Alzheimer’s, the next best thing is looking after your brain.”