In 2012 a four year old American girl, Charlotte Figi, was having up to fifty grand mal seizures per day. By 2013 she was down to just four per month. The improvement appeared to be due to treatment with ‘Charlotte’s Web’ a strain of medicinal marijuana with low THC and high CBD. Charlotte had been diagnosed with Dravet syndrome, a severe form of epilepsy which begins in infancy. The frequency and severity of her seizures was seriously impacting her development. She couldn’t walk, or talk, and it was very difficult for her to interact with other children in a meaningful way. After treatment with ‘Charlotte’s Web’ she slowly but surely improved, so much so that it appeared that this was some sort of ‘miracle treatment’. Unfortunately despite a resultant large increase in the number of children being given medicinal marijuana for epilepsy, no one has improved to the extent that Charlotte Figi did. The question is, why?

Dr Paul Shillito is a paediatric neurologist. About 70% of his patients are children with ongoing epilepsy. When news came through about the recovery of Charlotte Figi he, like many others in his field, kept an eye out for any hard evidence that cannabis could really be a miracle treatment. What he found, as you might expect, was that the answer was not as simple as it first seemed.

Cannabis can be largely broken up into two groups: hemp and marijuana. They’re the same plant, the only difference is the amount of the psychoactive compound tetrahydrocannabinol (THC) they contain. A cannabis plant with less than 0.3% THC is hemp, anything above 0.3% THC is marijuana. However, there are more than 70 other compounds that are unique to cannabis. These are known as cannabinoids, and the cannabinoid which has received the most attention for treating epilepsy is cannabidiol (CBD). CBD was identified in the early 60s and found to reduce epileptic seizures in mice. Prior to 2014 there had been numerous studies to examine the effect of CBD in animals, however there had only been five human trials. None of the human trials managed to provide evidence of reliable anti-epileptic effects.

After Charlotte’s story hit the news drug companies all over the world began trying to extract CBD to be used in isolation, without the potentially harmful effects of THC. The first company to succeed was GW Pharmaceuticals. GW immediately began a clinical trial using the oil (epidiolex) to treat children who had obvious physical seizures. 138 children took part in the trial, and the results were both mixed and controversial. Epidiolex was being judged on how well it reduced seizure frequency, however the frequency of seizures was being judged by the childrens’ parents. These were parents who were desperate for a cure. They’re not impartial, and their biases may have inflated the positive results of the trial. That being said, the data suggested the treatment was highly effective for some children. The side-effects, however, were significant. 79% of the children experienced side-effects including drowsiness, anorexia, diarrhoea, fatigue, and convulsions. Nine of the 138 children went into a state of ongoing seizure, called status epilepticus. It very quickly became clear that CBD was not the miracle drug it had been hyped up to be. 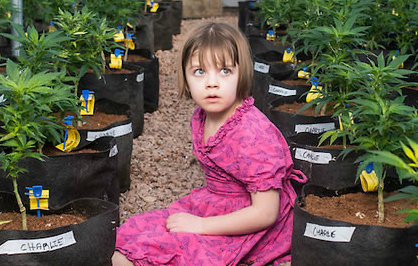 But what about Charlotte Figi? Did her recovery have anything to do with the drug? According to Dr Paul Shillito: Absolutely. Charlotte Figi’s case is incredibly well documented, and was closely monitored. Her seizures all but ceased while she was taking oil extracted from ‘Charlotte’s Web’. Over the course of two years she stopped taking the oil on three separate occasions and her seizures returned each time. When she resumed treatment, her seizures would cease again. It seemed to be a highly effective treatment for her. So why didn’t it work as well for anyone else?

We don’t know. No one does. The issue is that no one knows how CBD works. There is no information about how much of it enters the brain, about what it’s interacting with, or what it does in that interaction. We don’t even know if it is CBD itself which is the anti-epileptic. It may be that the combination of a number of cannabinoids in ‘Charlotte’s Web’ was what was creating the anti-epileptic response in Charlotte’s case. We don’t know because no one is looking at those other cannabinoids, let alone examining the ways in which multiple cannabinoids interact with one another. What we do know is that CBD slows the breakdown of some anti-epileptic medications, and in some cases the anti-epileptic effect it is having may just be due to a higher level of those other drugs in that child’s system. We also know that it has the capacity to work well for some people, but at this point there is no way of knowing who will benefit from it or why.

Would Dr Shillito recommend it to his patients? The answer is an overwhelming ‘No’ for a number of reasons. The only cannabis derived oil which can be legally obtained in New Zealand, with permission from the Ministry of Health, is Sativex. Sativex has equal quantities of THC and CBD. While CBD is a potential anti-epileptic, THC is known to induce seizures. Exposing these already vulnerable children to THC is not a viable option. Buying marijuana illegally and using it, ignoring the legal ramifications, is similarly problematic. So too is ordering ‘medicinal marijuana’ online, as more than 50% of that ‘marijuana’ turns out to not be cannabis and so cannot contain CBD. The only viable option is to wait for CBD oils to be made available.

Currently, the CBD oil used by GW Pharmaceuticals in their trials is restricted to clinical trial use only. If it were released to be used for treatment of epilepsy would Dr Shillito recommend it? Possibly. Likely users are often people in a desperate situation, and there is a chance that CBD could help them. At the present time it appears that the potential harm of CBD is minor compared to the harm of living with severe epilepsy, and in that situation a chance of recovery may be worth pursuing.

Maybe no one else will respond to CBD like Charlotte Figi has, but at the moment we have no way of knowing. As the trials continue, and as the testing continues, we will hopefully come to understand what has made her so different. From that point we may finally find a way to give other children a chance at that kind of miracle.