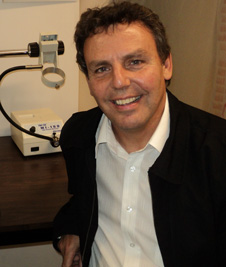 John Reynolds - one of 17 academics to be promoted to Professor.

Being promoted to full Professor is the icing on the cake of an incredible year for John Reynolds of Anatomy.

Associate Professor Reynolds, a neuroscientist with an interest in brain cell activity in the normal and disordered brain, recently returned to Dunedin from Oxford University. He spent the year in Oxford’s Department of Anatomy, Physiology and Genetics (DPAG) and the MRC Brain Network Dynamics Unit, investigating the use of light to activate the release of the brain chemical dopamine, and measuring how it affects circuits in the brain that go wrong in Parkinson’s disease.

"Otago’s promotion processes are extremely rigorous and involve thorough evaluation of an academic’s record of contributions in research, teaching, and service to the University and community."

He says working with some of the world’s top dopamine neuroscientists was a “fantastic” experience. He learned an “incredible” amount and formed some new exciting collaborations.

“It is always good to return home, however, where our community of Parkinson's neuroscientists is small but punches at an international level.

“Receiving the phone call from the Vice-Chancellor to announce the promotion was like the icing on the cake.”

Vice-Chancellor Professor Harlene Hayne warmly congratulated the all of the academics on their promotions, which take effect from 1 February 2017.

“Otago’s promotion processes are extremely rigorous and involve thorough evaluation of an academic’s record of contributions in research, teaching, and service to the University and community.”

Associate Professor Reynolds says he is grateful to a community of people who underpin his promotion, including many past and present laboratory staff, postgraduate and undergraduate students, colleagues, and his wife Jane and family, who “collectively form the hidden 9/10 below the iceberg that keep the work and me as a person afloat.”

The new Research Associate Professor (from 1 Feb 2017) is: