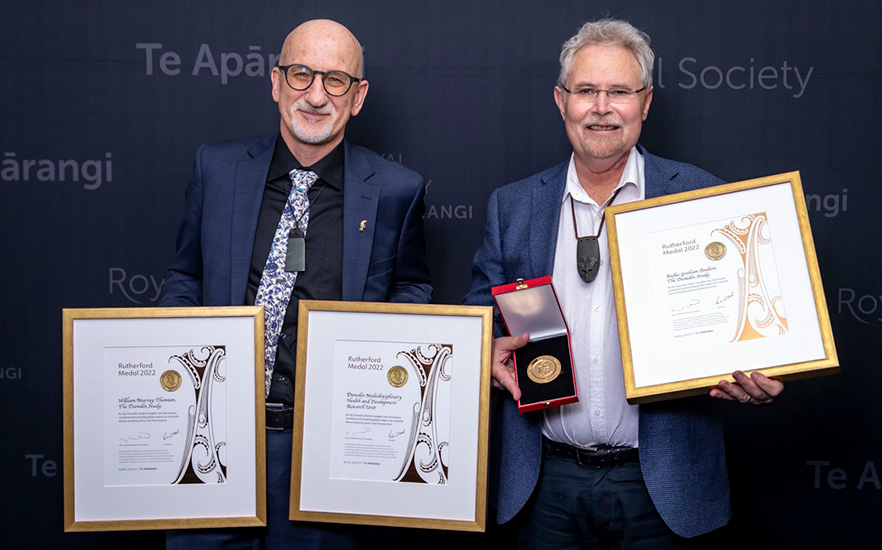 The University of Otago’s Dunedin Study – touted as the world’s most successful longitudinal study of a general community – has been awarded this year’s prestigious Royal Society of New Zealand Rutherford Medal.

The medal, which comes with prize money of $100,000, was on Wednesday presented to the study’s director of 22 years, Professor Richie Poulton and senior researcher Professor Murray Thomson, at a ceremony at the Glenroy Auditorium. Associate director Professor Terrie Moffitt and senior investigator Ashalom Caspi, of Duke University, were also named on the award.

The 50-year-old Dunedin Multidisciplinary Health and Development Study (the Dunedin Study) has been documenting the lives of more than 1,000 babies born in Dunedin in 1972–73. Every aspect of their health, development and wellbeing has been assessed as they have grown into maturity.

It is renowned for generating new, cross-disciplinary knowledge about a range of big picture issues such as influence of childhood experience on adult life success, interplay of nature and nurture and adult aging and disease.

The researchers have collectively produced more than 1,400 peer-reviewed journal articles, books, book-chapters and assorted reports on many aspects of human wellbeing, health, and development.

Professor Poulton says receiving the Rutherford Medal – which recognises preeminent research and is supported by Government – means a “great deal”.

“The Dunedin Study represents the one point of continuity in my professional life, and to be part of the team that won the award is a thrill.

“Equally, if not more importantly, this is superb recognition of the high national and international profile of the study. All those participating in the study from now on can happily do so against the background of having won this prestigious award.”

Professor Poulton does not mince words when it comes to what has attributed to the study’s success.

“Bloody hard work, attention to maintaining and respecting the cohort, and looking beyond the immediate horizon for the next place to go. Periodic reinvention best describes what has happened, with our most recent focus on geroscience, the study of the process of aging.”

However, both Professor Poulton and Professor Thomson agree it is the participants who should take the most credit.

“Thank you, thank you, thank you. I can’t tell you what an honour it has been for me to work with the 1,037 study members, and families and friends. They are the real heroes of the Study, not us,” Professor Poulton says.

“They have been so generous – to have been allowed into their lives for so long is a wonderful gift, not only to us as researchers but also to society and our understanding of the life course. To be part of this team and a part of these people’s lives has been a wonderful opportunity and an immense privilege for me,” Professor Thomson says.

“The study has been described as a national and international taonga, and I couldn’t agree more,” he says.

“The participants and the many researchers who have contributed to this success should take great pride in this award. Their work has had had a significant global impact on scientific theory, research, policy and best-practice over many decades.” 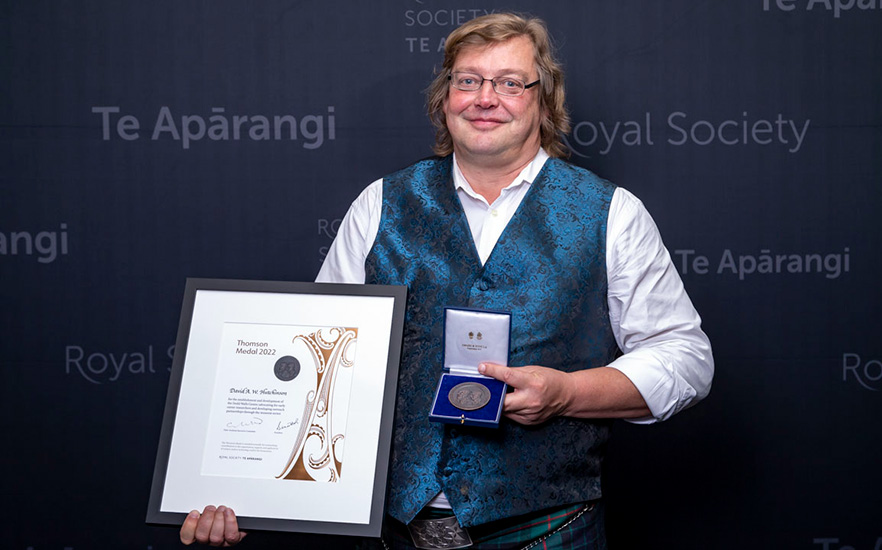 Leadership for physics research and outreach and supporting early career researchers for outstanding contributions to the organisation, support and application of science or technology in New Zealand was awarded to Professor Hutchinson, Director of Dodd-Walls Centre. It was presented to for establishing and developing the Dodd-Walls Centre for Photonic and Quantum Technologies, advocating for early career researchers and developing outreach partnerships through the museum sector.

From 2013, Professor Hutchinson led the Dodd-Walls Centre’s bid to become a Centre of Research Excellence and has been the Centre’s Director ever since. The Centre is a flagship for outstanding New Zealand physics research into the manipulation of light at the most fundamental, quantum level, and the control and manipulation of matter at the atomic scale. In partnership with Otago Museum, which Professor Hutchinson has also served on the board for, the Dodd-Walls Centre has delivered outreach across Aotearoa and the Pacific. In addition, he led Otago’s Ozone Group of early career researchers and helped form the InterAcademy Partnership’s Global Young Academy, which advocates for early career researchers across the globe, especially in developing nations. 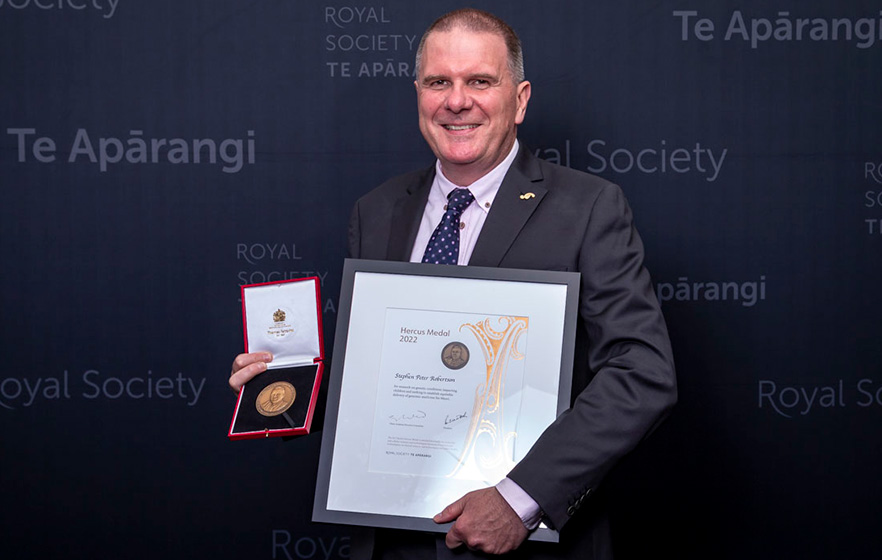 The Hercus Medal, a health sciences award for excellence in molecular and cellular sciences, biomedical science or clinical science and public health was awarded to Professor Robertson FRSNZ, Laboratory for Genomic Medicine, for research on genetic conditions impacting children and seeking to establish equitable delivery of genomic medicine for Māori.

Professor Robertson is a clinician-scientist and an international authority on the clinical and molecular genetics of life-limiting malformations and neurocognitive disorders. He has discovered the cause of more than 30 disorders, enhancing the clinical care of people with such conditions globally. He is committed to developing accurate diagnostic genomics for Māori and is currently co-leading the assembly of a national resource to enhance genomic medicine for tangata whenua. He is involved in the leadership of multiple national and international research consortia, and is Chair of Paediatric Genetics at Cure Kids. Professor Robertson translates his research findings into practice, and is committed to equity and access to care. 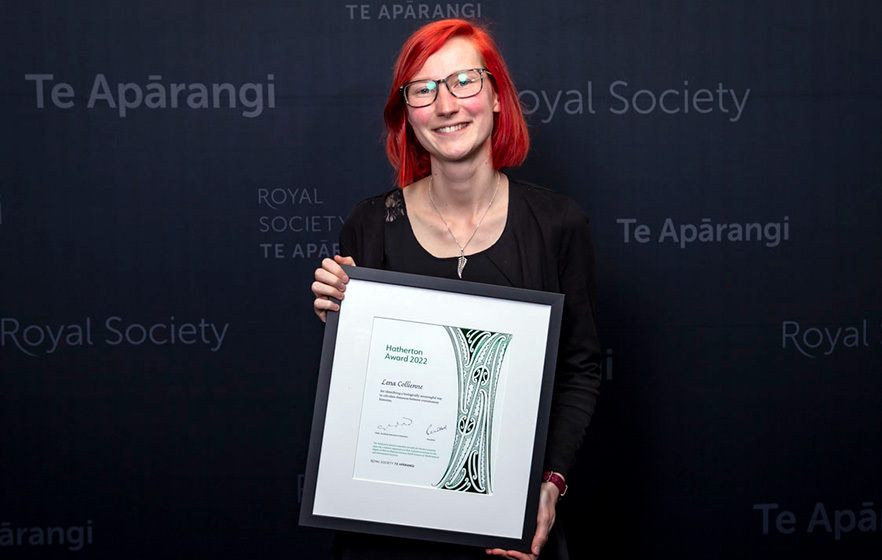 The Hatherton Award for the best scientific paper by a PhD student at any New Zealand university in chemical sciences, physical sciences, mathematical and information sciences was awarded to Dr Collienne, Department of Computer Science, for identifying a biologically meaningful way to calculate distances between evolutionary histories, such as between species or variants in genomic data analysis.

The number of steps needed to map one evolutionary tree on to another is described as the distance between them. To date, these distances have been complex and impractical to compute. Lena has discovered a process and an efficient algorithm to do this called Ranked Nearest Neighbour Interchange. This is the first positive result in such research in over 20 years. This algorithm has been incorporated into software widely-used for the analysis of genomic data. 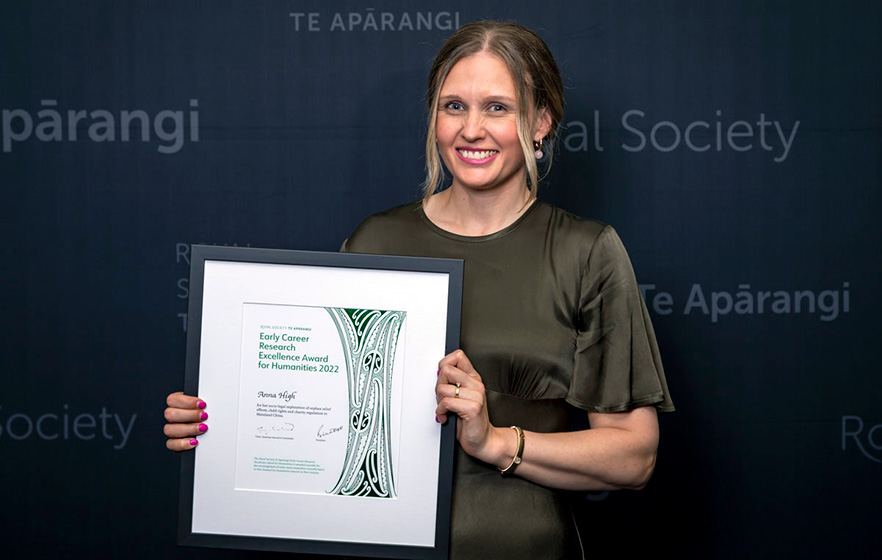 Dr High’s book Non-Governmental Orphan Relief in China: Law, Policy and Practice is based on extensive longitudinal, ethnographic research, drawing on interviews with NGOs and private caregivers across rural and urban China. Her book focuses on child rights and the oversight, both legal and extra-legal, of charitable endeavours, in the context of one of China’s most disadvantaged groups of children – gu’er, literally the “lonely children”.  Described as “masterful and thoughtful”, her book was awarded the 2020 Asian Law and Society Association Distinguished Book Award, reflecting its outstanding merit as an original piece of humanities research. 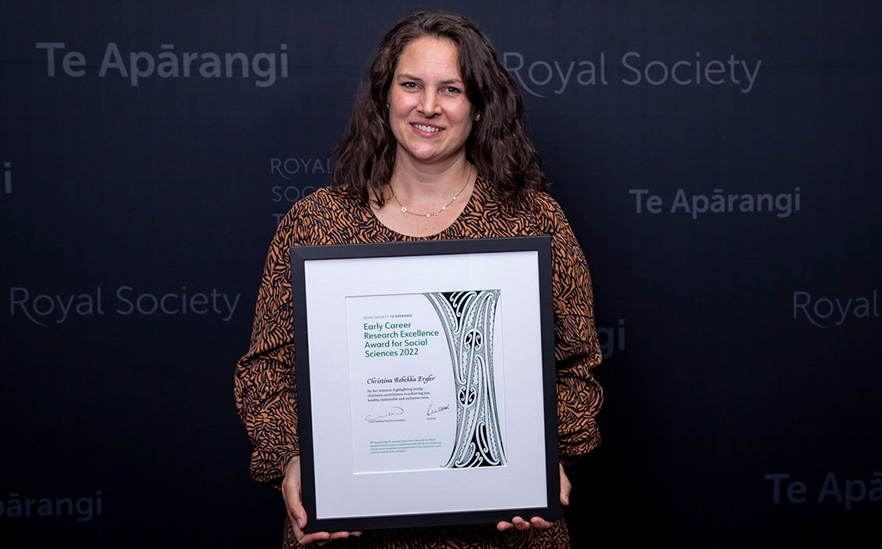 The Royal Society Te Apārangi Early Career Research Excellence Award for Social Sciences was awarded to Dr Ergler, School of Geography — Te Ihowhenua, for her research highlighting young children’s contribution to achieving just, healthy, sustainable and inclusive cities. Christina’s research demonstrates that young children are silenced on urban issues, but they deserve the right to be listened to. Young children demonstrate a logical interpretation of their environments and an awareness of risk and vulnerability, and they also care about their city, neighbourhoods and home spaces.

Dr Ergler’s work bridges disciplinary boundaries and is highly regarded for subscribing to child-led methodologies and provides accessible tools for planners and urban policy makers. Many seek out her expertise on including pre-schoolers voices on urban matters.