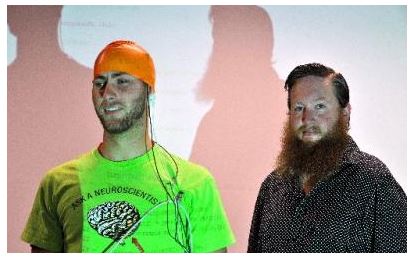 The Sunday afternoon world premiere of Musica in Cerebro was a mind-bender. The audience at the Brain Awareness Week concert listened to music inspired by the brain, and using the sounds of brain waves, while watching the brain waves of neuroscience PhD student Thomas Elston as he listened with them and responded to the music.

The Brain Health Research Centre approached Mozart Fellow Jeremy Mayall last year, to see if he would be interested in composing music for Brain Awareness Week. Mr Mayall worked with BHRC director Professor David Bilkey to discover more about the brain's electrical activity, and they converted brain waves into a form that could be heard. Mr Mayall then used those sounds as inspiration for his composition.

You can watch the ONE News coverage

and read about it in the Otago Daily Times