The 2016 Brain Health Research Centre conference began with a public lecture by Professor Stephen Robertson, a paediatrician and developmental geneticist who researches disorders of human development. His lecture ‘The evolving human brain: fertile genetic ground for disease?’ explored how the very genetic changes which make us human may have also created new disorders.

Over the course of evolution our brains have changed dramatically, doubling in size in the two million years it took us to evolve from Homo habilis to Homo erectus all the way to Homo sapien. This increase in size may have been due in part to how our brains are built.

The neural stem cells of your brain, the cells which create all of your neural cells, are in an area called the periventricular zone, or PVZ. These general neural stem cells create stem cells of different types, and then those specific stem cells create the actual cells which form your brain. In other mammals all of these cells are created in the periventricular zone and then migrate out to their proper areas. However, in humans this migration can start earlier with the specific stem cells having been shown to migrate throughout the brain as they create new cells. 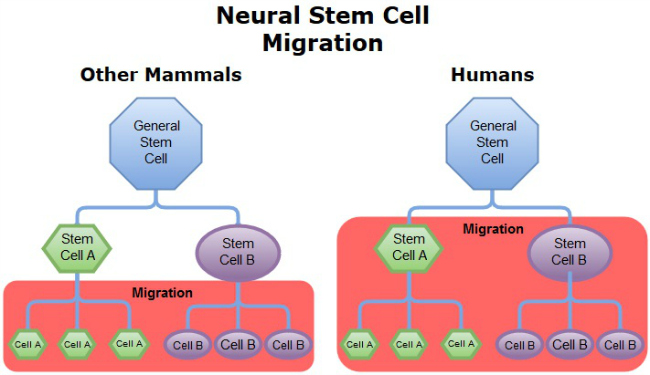 This may seem like a small difference, but it is fundamental to our neural development as humans. This difference, Professor Robertson believes, may be why we have so many developmental disorders which are caused by connectivity issues in the brain. On the other hand it may explain why this process fails in some humans but can’t be replicated in most animals.

Imagine this: A person has a seizure. They’re taken to the hospital and doctors perform an MRI. What they find are a series of lumps inside the lateral ventricles of that person’s brain. The lumps aren’t cancer, they’re not swelling, these are healthy neural cells which are just in the wrong place. This is periventricular heterotopia (PH), and this is usually how people find out that they have it.

In this disorder some of the neural cells which should have migrated out of the PVZ just don’t. Instead, they form a layer around, and mounds within, the lateral ventricles (shown below). These cells cause seizures because they, like all neurons, form connections to other cells. Their connections become circular, setting up a feedback loop of stimulation which eventually sets off a storm of electrical activity through the brain. 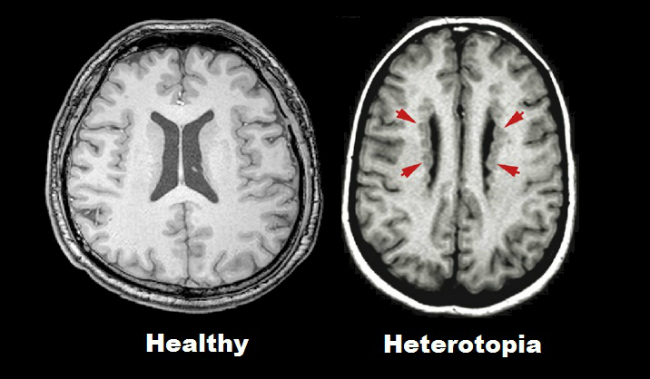 The symptoms can be managed with anti-epileptic drugs or, if necessary, surgery. But why does it happen? The answer is in our genes.

We inherit our genes from our parents, but in the process of inheritance some of these genes are mutated. A mutation is an alteration in the genetic code. Sometimes these mutations have no effect and simply swap out a piece of DNA for an equivalent piece, but in other cases the mutation can change what the DNA produces.

The average person has about 0-4 new mutations in the coding regions of their DNA. Professor Robertson’s study of the genomes of people with PH located around 50 such mutations and they proceeded to study their location and predicted effect on brain development. They found that these mutations are more likely to occur in the DNA code of genes which are highly intolerant to change, and so these mutations are more likely to have a serious impact in how the affected genes function.

One affected gene in particular is highly specific to primates. It produces a protein which can arrange itself into three different forms. The third version is only found in primates and it turns out to be missing in the brain of one of the subjects with PH in this study. This could mean that the missing protein is necessary for some aspect of human neural cell migration, and potentially performs a role which doesn’t exist for non-primates.

In order to understand disease and disorders, we need to understand ourselves. A large proportion of the illnesses we suffer from are far reaching, usually affecting other mammals in very similar ways, but in some cases our illnesses are entirely our own. Evolution took a ‘risk’ when it invested in our brains, a risk that was taken with few other animals. We have benefited from that investment with our ability to develop better shelter, medicine, and countless other inventions; but Professor Robertson reminds us that there is a cost to all this, hiding within our genes.

You may get your eye colour from your father, or your temper from your grandmother, but your brain? Your brain is from Plesiadapis, the first ever primate, from Homo habilis, the first of our genus, from the first Homo sapiens who emerged two hundred thousand years ago. Your brain makes you who you are, ordered or disordered it makes you human, and there is nothing quite like it in all of the animal kingdom.