This is the age of bionics, of cyborgs, with technology allowing us to replace bones, hearts, ears and more with metal and machines. For Professor Rob Shepherd this progress toward machine-enhanced life has just begun. Shepherd is the director of Australia’s ‘Bionics Institute’ a research institute founded in the 80s by Graeme Clark, one of the original developers of the cochlear implant.

Within the institute Clark was able to transform the cochlear implant from a huge machine, complete with a handheld microphone and processor which had to be lugged around in a satchel, to a tiny plastic device that sits behind the ear and against the scalp. “It was never meant to be a fully formed hearing device,” Prof Shepherd reveals, “originally it was just meant to be a support for lip-reading.” Modern cochlear implants, however, have proven to be a functioning replacement for actual ears, though crowded environments and music are still somewhat of a challenge. 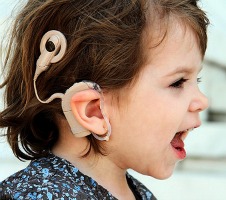 The main obstacle, as seems to be the case in each bionic product, is the balance between function and battery life. A cochlear implant has an external microphone which picks up sound, the sound is then turned into a digital signal by a micro-processor, and then that signal is sent down wires which have been implanted into the cochlea of the ear. The wires in the cochlea have little electrodes in them which stimulate the auditory nerves according to the digital sound pattern created by the micro-processor. To have more precise hearing you’d have to have both more electrodes and a better micro-processor, significantly increasing the power drain on the batteries. This may not seem like a big issue, but having to go from changing a battery every few days to having to change it every few hours is a big ask. With that problem in mind, fine tuning of the implant continues, a process which is as important as it is seemingly endless.

Bionic ears are just one of three branches of research for Shepherd and his team, they’re also working to develop bionic implants for the eyes as well as for the brain itself. He’s hesitant to make any big claims about the bionic eye. “It’s not intended to be a replacement for vision,” he says, though it sounds awfully similar to the original description of the cochlear implant, “it simply allows people to differentiate between areas of light and dark so that they can navigate space more safely.” The bionic eye works similarly to the cochlear implant, using a device to record the visual input and then a processor to turn that information into an electrical pattern for the implant in the eye. The implant uses an array of 24 electrodes that stimulate the optic nerve directly. Each electrode indicates an area in space, which produces and experience for the individual called a phosphenes, which look a lot like seeing black and white pixels. The same rules apply for the implant as they would for a tv screen, 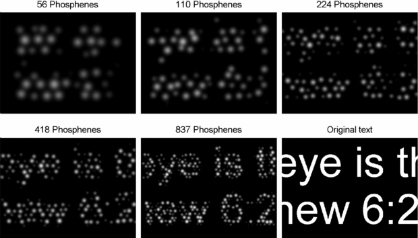 the more pixels you have the higher the resolution, but instead of having thousands of pixels to make up a single image the bionic eye has just 24. This is why it isn’t currently a replacement for vision. What is standing in the way of more precise bionic eyes? The power requirements. Having more electrodes is just not viable for an implant which would be used day in and day out.

The power supply issue seems particularly frustrating but it is, for the most part, out of his team’s control. They design around it, and despite the issues it causes, they continue to make progress. Their third, and last, research arm still comes up against this issue. Deep brain stimulators have been around since the 80s, directly stimulating the brain in order to relieve the symptoms of disorders such as epilepsy and Parkinson’s disease. The technology, however, is ever developing. Implants need to be incredibly soft, but also stay in place, they need constant power and their signals require as much, if not more, processing power as cochlear implants. Currently, deep brain stimulators are powered and controlled by a processor and battery implanted in the recipient’s chest. Every five years or so surgery is required to change the battery, while this is less risky than repeated brain surgery it can still be problematic. This is just one part of what Professor Shepherd hopes to improve upon, aiming to develop a cochlear-like system which would sit on the scalp instead. It’s a development which could prove to be vital as the technology for brain stimulation tries to meet increasingly complex demands, such as Crohn’s disease, stress disorders, and increasing precision for epilepsy and Parkinson’s disease.

Bionics are already reshaping our world, allowing us to live better and longer lives. However, no matter how fast the technology develops, there are always limits. For implantable bionics that limit is, and will likely always be, power. There is no point in developing eyes which need a car battery to run, or ears that have to be plugged in to the wall. While the work of Professor Shepherd, and the Bionics Institute, is scientifically important it is also grounded in the real world. In order to make meaningful progress prosthetics have to be able to be used, they need to improve life and not simply move the impairment somewhere else. In their work Professor Shepherd and his team have come across many barriers, but the progress they’ve made, and the work they are currently doing, could meaningfully improve hundreds of thousands of lives.