Neurons are the main cells in your nervous system. They process information by sending, receiving, and combining signals from around the brain and the body. These signals can be anything, from an emotion, to a thought, to a movement, your neurons process it all. Each neuron can be broken up into three main parts: the cell body, which holds the DNA and the machinery to keep the cell alive and working; the dendrites, protrusions from the cell body responsible for receiving and integrating most of the information coming in to the neuron; and the axon, the tail of the neuron which sends information to other cells. The entire cell needs food, and waste removal, and proteins to survive. These different areas, however, also need different machinery and materials in order to do their jobs. So, how does the cell get everything to where it needs to go? 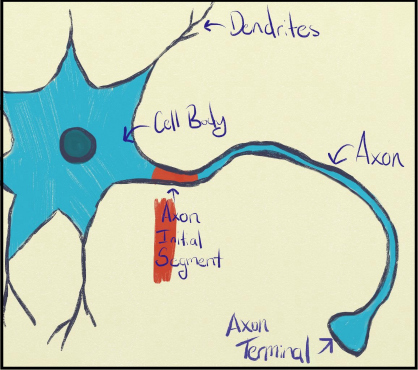 The overall shape of a neuron is created by tiny structural proteins called microtubules. These microtubules act as a scaffold which the membrane of the cell can sit against, this lets the cell have long protrusions instead of just being a sphere. Microtubules are also used for transport of some materials within the cell. Proteins called kinesins and dyneins walk along the microtubules, dragging packages of proteins along with them. Axons in particular can be incredibly long so the cell can’t just wait for material to passively drift from the cell body all the way to the end of the axon; it has to actively transport that material using those walking proteins.

So, we have microtubules and we have proteins that walk along them. This is where things get interesting. Between the cell body and the axon is an area called the ‘axon initial segment’ (AIS) which only some material can pass through. For more than a decade this has stumped scientists. Why should one type of material pass through the AIS, but another one can’t? The answer, according to Dr Laura Gumy, of the University of Otago’s anatomy department, is chemical.

Dr Gumy and her team found that when a protein called MAP2 was switched off in a neuron the normal pattern of material movement changed, causing more material to move down the axon and away from the cell body. This indicated to her that MAP2 was the driving force in maintaining the separation of materials at the AIS. How does MAP2 do this? To answer that we’re going to have to take a closer look at kinesins. 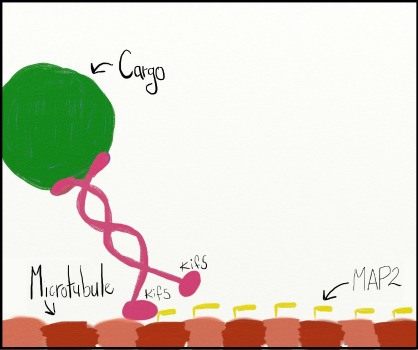 Each complete kinesin unit is made up of two subunits, one for each foot. Each subunit could be any of the 45 or so types of kinesin, they each have different properties and they don’t have to match. In the neuron the most common types of kinesin are KIF5 and KIF1. MAP2 can’t attach to KIF1, but it can attach to KIF5 and when it does it stops KIF5 from being able to move along microtubules.

This is all incredibly specific. Usually when we think about the brain we focus on the whole brain, or one particular area, not the individual components within its cells. Why do we need to know anything this specific? Because this kind of transport within cells has been shown to fail in Alzheimer’s, Parkinson’s, Huntington’s, and many other diseases. When the neuron can no longer control where molecules go, or cannot get molecules where they need to be, it can’t do its job. This is why we need to understand such microscopic functions, because when they fail the cell fails, and when the cell fails, the brain can fail. If we only looked at the larger picture we would miss opportunities to correct these issues and to target potential therapies to the exact problem area.