Richard Prentice is in his second year of a PhD in pharmacy, working with Dr Shakila Rizwan. His project, which just won him the BHRC Helen Rosa Thacker Scholarship, tests a new way of delivering epilepsy medication to people suffering from the disorder. If Richard’s experiments prove successful they could one day vastly improve the lives of thousands of people living with epilepsy.

Epileptic seizures are caused by excessive activation of an area of the brain. This activation interferes with how that area normally functions. Depending on the kind of epilepsy, a seizure can then spread from that original area to affect a larger area of the brain, or the whole brain, seriously impacting the individual’s ability to function. This can cause a number of different symptoms, with the most visually obvious being bodily tremors.

In order to minimise the chance of having a seizure, people diagnosed with epilepsy take antiepileptic medications. There are no easy ways into the brain, so the medications have to be swallowed or injected in order to make their way into the blood stream, and from the blood stream to the brain. “People have to have a high level of the drug in their system at all times,” Richard explains, “in order to allow a very small amount to make it to the brain and be there to counteract seizures.” This means that the majority of the drug in the body isn’t actually doing anything to prevent seizures. This wouldn’t be much of an issue except that the side-effects of antiepileptics range from the mild, such as fatigue and nausea, to the extreme, including liver failure and birth defects. There are some with the disorder who cannot live with those side-effects, and instead have to risk further seizures. 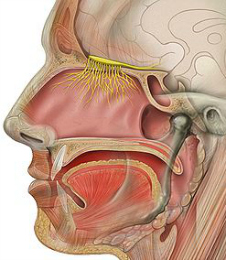 The systems which Richard and his supervisors, Dr Rizwan and Dr Andrew Clarkson from the University of Otago and Associate Professor Nigel Jones from the University of Melbourne, are testing take advantage of another way into the brain and could significantly reduce the ill-effects of antiepileptic medication. Instead of going through the blood, they’re going for the only open access to the brain; up the nose. At the very top of the nasal cavity there are nerve fibres that come through the bone of the skull. These nerves are used to detect smell, but Richard plans to co-opt them in order to get medication straight into the brain. This would mean a few different things: Firstly, the drug would only affect the brain, preventing those side-effects caused by interactions with other areas of the body and other medications in the blood; Secondly, the medication would be targeting a common seizure-generating area of the brain allowing for the drug to be effective without interfering with the rest of the brain; and thirdly, these individuals wouldn’t have to have the drug in their system all the time in order to get the effects, so any side-effects caused by the drug working on this very specific area of the brain would be short-term.

These new systems could significantly lessen the barriers to antiepileptic use, would potentially increase the effectiveness of the medications by allowing lower doses for shorter periods of time, and would also prevent the brain from expelling the drugs and increasing resistance. This raises the question, why hasn’t a system like this reached the clinic? Because it’s not easy to get right. Dr Rizwan’s lab has spent years working on a way to formulate sufficient doses of antiepileptics into quantities of powder or liquid small enough to be administered to the upper nasal passage, a stage which needed to be completed in order for this work to be at all possible. Only now is this research at a stage where it can begin to be tested for effectiveness. It has been a long and arduous process up ‘til now, and it’s far from being over.

In May Richard will head over to Melbourne for a few weeks to meet with Assoc. Prof. Jones, in order to learn the skills necessary to run his intended experiments. Once he returns, with new skills and understanding, the hard work will truly begin. While Richard appears hopeful for the outcome of the research, he’s hesitant to put forward any bold claims. “If nothing else,” he says “we’ll at least learn something about the intranasal route to the brain and be able to develop our ideas on how to exploit it.” In itself that information would be worth the years of research behind and ahead of him. If, on top of that, he’s able to prove that this could be an effective way of administering anti-epileptics he and his colleagues stand to make a real difference in the lives of those who live with epilepsy.