As a child Angus McMorland took apart machines. He deconstructed them screw by screw until he had the whole system laid out in front of him, and then he’d try to piece them back together. It was a learning process, taking things apart, it let him see how the whole machine worked in unison toward an end goal. He was fascinated by it. “To me,” he says, “the brain was the most complicated machine of all, and I wanted to understand it.” But the brain is much more complicated than any single machine, to understand it you have to look at a single function and pull that apart. Angus chose movement. 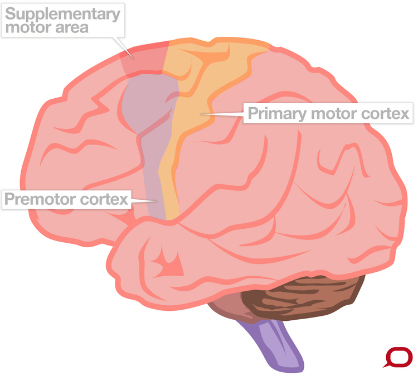 Our motor system is, broadly speaking, controlled by two strips of cortex: the motor cortex, and the premotor cortex. These areas send signals down the spinal cord to the various nerves that control our muscles. They make sure that we execute the movement we intended, and that the rest of our body is prepared to compensate for that movement. This system, for a variety of reasons, is also the most highly impacted by injury, disease, and disorders. A dysfunctional motor system, however that manifests itself, can be highly disruptive to an individual’s life. In many cases, this cannot be fixed by targeting the motor system itself as often that option isn’t available. However, if we understand how the system works then we can translate brain signals for a machine and have it move for us.

First, we need to understand how this system communicates naturally. When researchers look at individual brain cells in the motor cortex a pattern begins to emerge. Each neuron has a particular area in space that it likes the most. That neuron is the most active when it is telling a particular body part to move toward that space, and becomes the least active when the body part is moving away from that space. By adding the activity of all these neurons together you get a spatial vector, which is a direction in space, which tells you the direction and distance a part of the body is going to move. 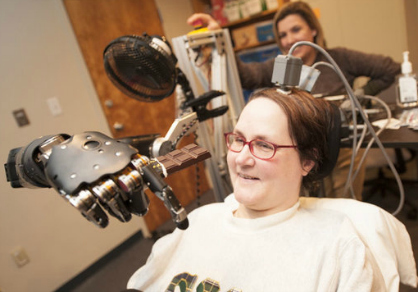 With this limited information researchers like Angus have been able to hook robot arms up to receive information from the motor cortices of people with tetraplegia. For some this allowed them to move for the first time in years. At first the arms were incredibly basic with just up and down, left and right, forward and back. Now they have wrist movement, and ten or more different hand shapes to choose from. These devices have proven to be not only effective, but life changing for people who had been trapped in completely immobile bodies. 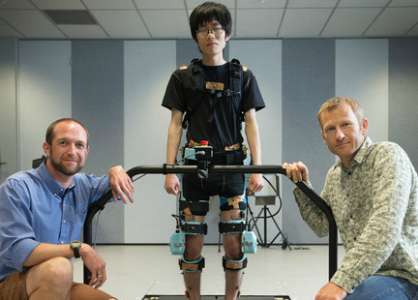 Angus, however, is now focusing on those bodies that just need a little push. In his lab at the University of Auckland Angus is fine tuning exoskeletons. These machines will take the electrical impulses sent to your muscles and move accordingly. This doesn’t just mean creating a big movement in the same direction as the electrical impulse, it can mean adjusting a movement that would have gone off course, or preventing a movement which could have resulted in a fall. These machines are designed for people with wasted muscles, Parkinson’s, and cerebral palsy, conditions where the connection between brain and muscle is still intact but is, in some way, damaged. “The problem at the moment,” Angus says, “is the lag. You know when your computer mouse is slightly out of time and how frustrating that can be? Imagine that feeling when you’re trying to move your leg.” It’s a learning curve to try to get these things right, but it’s worth it. “In ten years we expect to have a product people can use at home,” he tells the crowd at brain week, and it’s an expectation he sounds hopeful for.

While he may not yet be at the end of his journey, Angus has made good on that childhood fascination. He took apart the motor system, looked at all those pieces in front of him, and built something new around it. Something that could improve the lives of thousands of people.