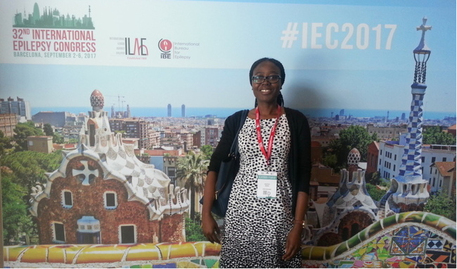 Congratulations to PhD student Nadia Adotevi who was selected as a platform speaker at the 32nd International Epilepsy Congress in Barcelona last month.

Nadia was accepted for a new mentor programme being run at the congress, which matches students and mentors for educational opportunities not only during the conference, but for life. Her mentor is director of child neurology Prof Solomon Moshe, Albert Einstein College of Medicine in New York, who is also the past president of the International League against Epilepsy.

Nadia was initially a little intimidated by being paired with such a “big time” researcher, but said he soon put her at her ease by being very down to earth and interested in her PhD research. She is studying with Associate Professor Beulah Leitch in the Department of Anatomy.

Nadia was also awarded a travel bursary from the conference organisers, the International League Against Epilepsy (ILAE) to cover her travel expenses.