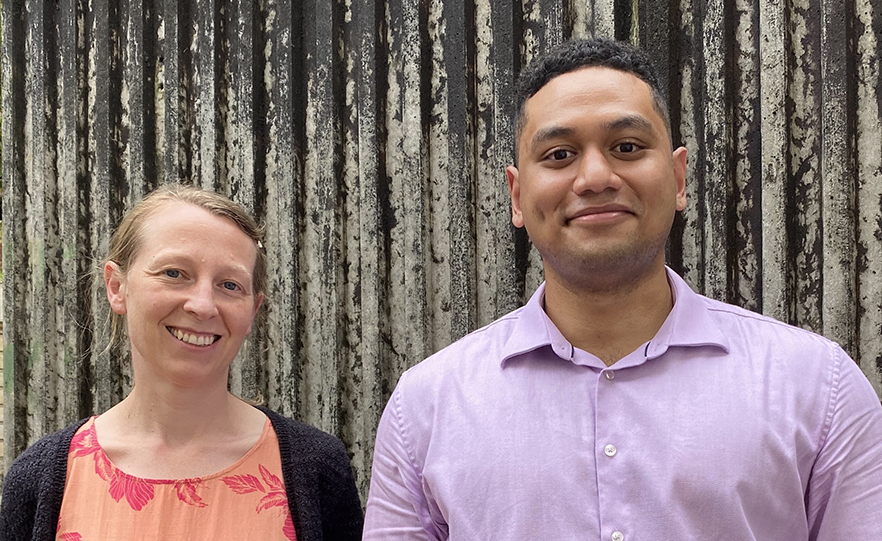 A summer internship student at Otago has been exploring the potential of a genetic variant associated with pacific peoples that has shown to be protective against gestational and Type II diabetes.

23 year-old Eugene Kado, a fifth year Otago Med student had never had any experience within a working lab, until he was invited for a Summer Studentship to work on a special project in Professor Dave Grattan’s lab, working under Dr Sharon Ladyman.

Eugene spent three months mapping out the expression of the gene variant CREBRF within the hypothalamus region of the brain. The summer project has helped provide some much needed groundwork for a much larger project that is already taking place with researchers from across the country.

And what’s so special about this specific gene?

“Well CREBRF is associated with an increase in BMI (body mass index) which isn’t necessarily an increase in fat, but more muscle mass, and people with this gene tend to be taller. It also has an inverse relationship with Type II diabetes, which means people with the variant have a low risk of contracting it.” explains Eugene.

“This gene is also specific only to Māori and Polynesians, so we were interested to see what differences there were in the brain in how this gene was expressed.”

About 25 per cent of pacific peoples possess the CREBRF variant which makes it quite widespread amongst the population. However, not much is currently known about exactly what the variant does, and where it does it within the brain.

Eugene’s secondary supervisor, Dr Sharon Ladyman (Senior Research Fellow from the Department of Anatomy and the Centre for Neuroendocrinology) says there is a great research interest into this gene as it is not only seems to be protective against Type II diabetes, but also against gestational diabetes.

“Previous research came from a study of women who were suffering from obesity and would thus traditionally be at high risk of gestational diabetes. In this study, women who possessed the CREBRF variant had very low risk. For people who had two copies of this variant, none of them showed gestational diabetes.”

The Grattan Lab is particularly interested in how the CREBRF gene may affect prolactin, a hormone secreted in the brain that causes the breasts to grow and make milk during pregnancy and after birth.

“Generally if you have lower levels of prolactin in the pancreas, you don’t see the changes in glucose homeostasis and insulin secretion that would normally happen in pregnancy, and you would end up with gestational diabetes.” says Sharon.

“In early models we could see that those with CREBRF knock in, that is – those that have the variant possessed slightly elevated levels of prolactin. So perhaps this variant is acting within the brain on the TIDA neurons and changing the function of these neurons to allow for more prolactin to be secreted, whereas normally they would inhibit secretion.”

“We didn’t even know where in the brain it was expressed because nobody has looked for it. Eugene’s project was the first initial mapping to see where it was coming from in the brain.”

“This is part of a much larger project that involves colleagues from the Maurice Wilkins Centre up in Auckland, with the aim that we can learn how this variant is protective against gestational diabetes and type II diabetes. If we knew that, then we might be able to develop new treatments and also targeting our interventions to populations that have a higher risk factor, like those who don’t have the variant.”

Eugene greatly enjoyed his time in the Grattan Lab and mentions this opportunity has given him a good idea of what is involved in carrying out field work and discussing the results.

The internship was also successful for the Grattan Lab and Sharon expressed how important it was for young students to get the chance to see real neuroscience in action.

“I think it’s great for students to come and work in a lab. They might never do research in their whole career, but they will probably read research papers and hear about them so these internships give them a really nice visual experience and exposure as to how we find things out.