History of Biochemistry at Otago

When the Department of Biochemistry split from Physiology in 1949, Professor Norman Edson became the Department Chair. At Cambridge, Edson had been Hans Krebs's first PhD student, studying the formation of ketone bodies in liver. He continued to work on metabolism after his return to Otago, first in the metabolic pathways of Mycobacteria, and later in the metabolism of polyols. 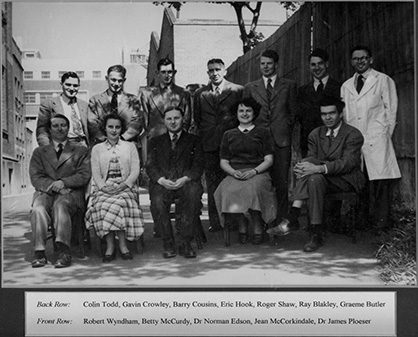 The 1950 departmental photograph. Professor Norman Edson is third from the left in the front row.

Early research of other members of the Department also almost exclusively revolved around the enzymes and pathways involved in mammalian, yeast, and bacterial metabolism, partly building on established skills and expertise, and partly because of New Zealand's distance from the large and expensive equipment needed for other areas of biochemical research.

George Petersen's DPhil work in Oxford was instrumental in the development of sequencing technologies for DNA, and his appointment as Chair of Biochemistry in 1968 led to expansion of research into molecular biology and related areas. At the same time, the decreasing cost of air travel meant that structural biologists could be based here and travel to overseas research hubs for short periods of time to use X-ray and NMR facilities. This, together with Professor Petersen's philosophy of studying the "whole picture", meant that the focus of research in the Department broadened considerably during this time. 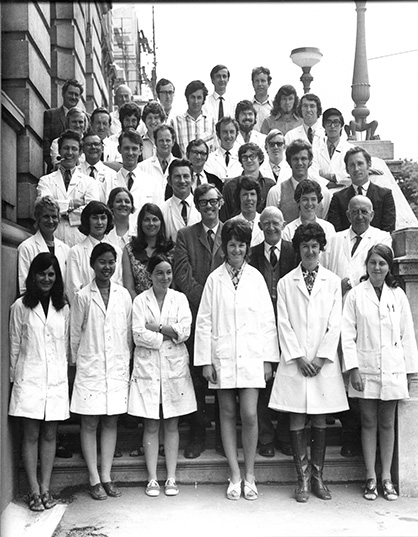 The 1971 departmental photograph. This was taken just before the move to the current building, Professor George Petersen is the tall chap in the second row without a lab coat.

In 1971 the Department moved to the new large purpose built building where is still operates. An extra floor was added in 1998 to accommodate the ever growing research groups it houses.

Massive reductions in both the cost and the size of advanced technology equipment in later years have meant that at the present time Otago's Department of Biochemistry is equipped at least as well as most universities around the world, and the research performed by its scientists and postgraduate students is just as varied.

Important contributions to science by our staff have included pioneering work on DNA sequencing, the discovery of ribosomal frameshifting as a control of transcription, and the elucidation of the role of CDH1 gene mutations in familial gastric cancer. More recently, new discoveries have included how queen bees control hive fertility, genetic insights into the prevalence of gout in Māori and Pacific Islands populations, and a significant contribution to the development of a new class of drug to treat chronic lymphoid leukaemia. Several research teams work in agriculturally important areas; work includes the elucidation of bulb-forming mechanisms in onions, and genetic analysis of the kiwifruit pathogen Psa. 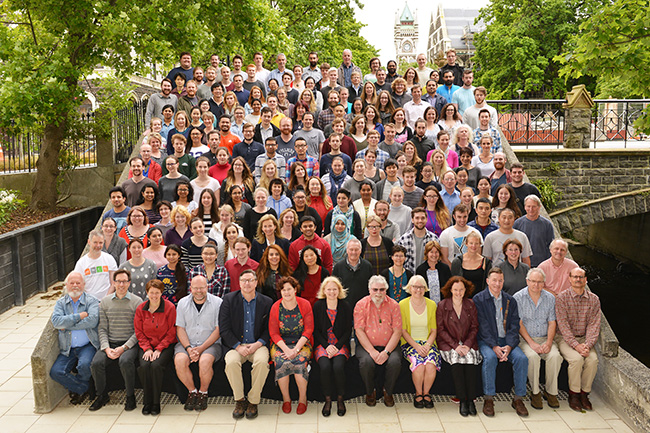 The Department of Biochemistry staff and postgraduate students in 2016. Department head Professor Catherine Day is in the centre of the front row.