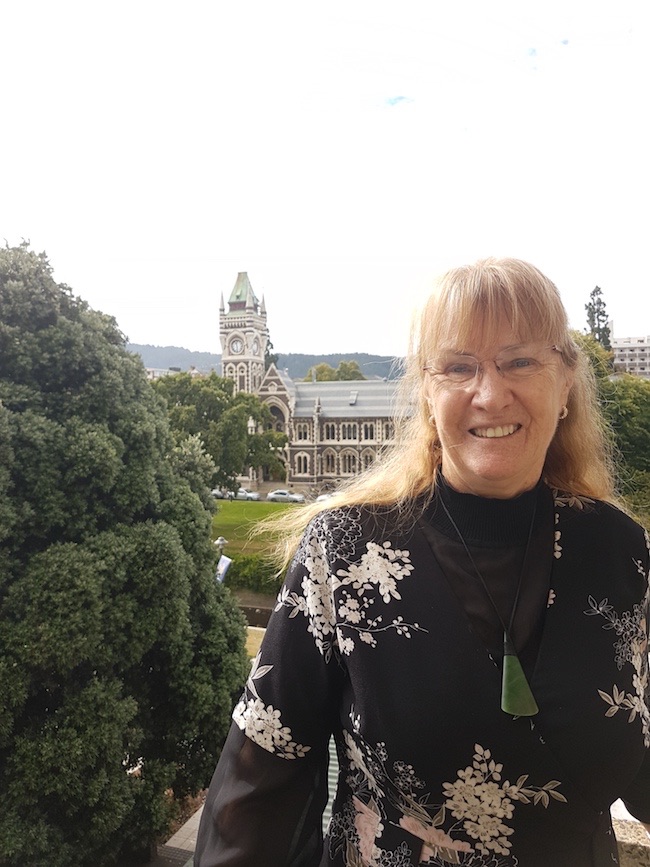 Dr Jillian Evans outside the University of Otago clocktower.

Among her many achievements, she has helped to develop three drugs for the treatment of diseases such as cystic fibrosis and asthma, and co-founded several successful pharmaceutical companies.

Refreshingly chatty and bubbly, she generously shared her enthusiasm for science and life with the Department in two separate talks.

At the weekly seminar, she managed to squeeze the story of 18 years of development of the drug Montelukast into one hour. Montelukast is a leukotriene receptor antagonist that has been highly successful in the treatment of asthma and seasonal allergies. Its development was underpinned by years of solid ‘old fashioned’ pharmacology.

Dr Evans finished the seminar with her concerns for the state of drug development research in New Zealand, including a lack of understanding of metabolic effects on drug candidates, a lack of early toxicity studies, the heavy restrictions and paperwork involved when importing important research tools into the country, such as chemicals and cell lines, and the problems encountered when having to partner up with large international companies to get past past phase I clinical trials.

She also gave a talk to postgraduate students and postdoctoral fellows about making a career in industry.

Dr Evans grew up on Waiheke Island, and via degrees at the Universities of Auckland and British Columbia, and a postdoc at University of McGill, started a long career in pharmaceutical development at Merck in Montreal. Now based in San Diego, she continues research into treatments for the rare lung disease LAM (Lymphangioleiomyomatosis).

She still maintains constant contact with New Zealand, visiting regularly, and giving talks as much as she can to encourage a new generation of scientists.