Scientists and artists peer into each other’s worlds

Otago Biochemistry research into a seaweed protein and how ice forms have inspired the creation of two beautiful artworks: a knitted cowl and a piece of contemporary embroidery.

The artworks were part of a recent exhibition of art inspired by science, held at the Skinner Annex at the Otago Museum. This was the seventh of the Art and Science Series, co-coordinated by Pam McKinlay from the Dunedin School of Art and Dr Jenny Rock of the Otago University’s Centre for Science Communication.

In this series, scientists and artists are paired up and meet for an hour or so every month over the best part of a year. During their meetings, they share with each other the nature of their work and the process used to produce that work. The artists then interpret the research in a piece of art.

When you view this art, it’s important to remember that the aim of the series is not simply to illustrate the science, but to inspire an artistic response to the scientific research. 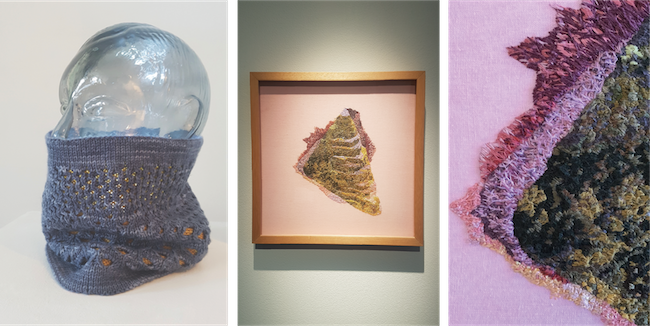 This year, the theme ‘Art+Water: Mountains to the Sea’ brought together scientists involved in a diverse range of research, from water-borne disease in birds, and fossils from aquatic animals, through to the effects of ocean acidification, and conflicts in communities around water scarcity. The exhibition featured research from two laboratories at the Otago Department of Biochemistry: those of Associate Professors Sigurd Wilbanks and Craig Marshall, who were paired with artists Georgina Young and Dr Stella Lange.

Craig studies how molecules help creatures to survive in freezing conditions. His investigations into creatures such as fish, brine shrimp, nematodes, and insects has led him on adventures to environments well beyond the biochemistry lab, including Antarctica.

Stella Lange is a principal lecturer at the Otago Polytechnic School of Design, and is particularly interested in textile craft and repair. She was intrigued by Craig’s description of how ice crystals form, which inspired her to design and knit a lace cowl entitled ‘Dirty Ice’.

“The idea that a slight change in the water – a contaminant or chemical shift can result in a deformation or disruption to the ice crystal structure fascinated me and I wanted to explore how mimicking that disruption in a regular established knitted lace pattern could be interpreted in a garment designed for frosty conditions”, she wrote on the knitting pattern for her piece.

With a slightly different take on water-related research, Sigurd and his student Pauline Uyseco study a protein that comes from red seaweed, called phycoerythrin. This protein collects light for the seaweed to use in photosynthesis, and gives it the bright red colour.

Sigurd and Pauline harvest the seaweed from the Otago Harbour, often wading right into the icy seawater to retrieve it. The watery theme continues right down to the molecular world they explore: the phycoerythrin protein can only thrive inside the watery environment inside the cells of the seaweed.

After learning about the science of phycoerythrin and seeing its amazing colour, fibre artist Georgina Young decided to dye a piece of fabric with the bright red protein. She dipped linen into a preparation of phycoerythrin 20 times to build up the pinky-red hue, then embroidered a complex, abstract image directly onto the coloured linen using satin and chain stitching. The image is influenced by the way that proteins are made: the threads used to make it are originally one-dimensional objects (like polypeptide chains) that are then folded/sewn into three-dimensional knots and stitches (like folded protein structures) that interact in sometimes unexpected ways.

Both scientists and artists agreed that the Art + Science series was a worthwhile exercise to take part in, and helped them see both their own work and others' in a different light.

You can download the knitting pattern for ‘Dirty Ice’ here:

and read/see more about all of the Art + Water artworks in the exhibition catalogue here: