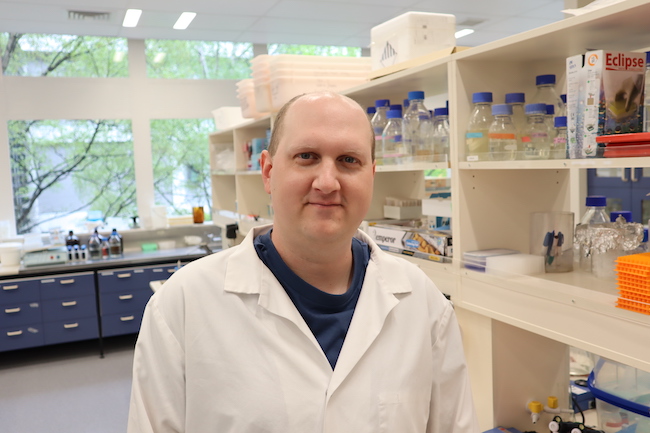 Matthias is seeking new ways to fight Staphylococcus aureus, a bacterium that can cause nasty infections that all too easily get out of control and lead to sepsis and death.

In Aotearoa, the number of antibiotic-resistant Staph-related infections are among the highest in the developed world; these infections are a major cause of death, and disproportionately affect Māori and Pacific peoples.

One of the tactics that Staph bacteria use is to forms biofilms – a community of bacteria embedded in a sticky blanket called a matrix. Staph biofilms can grow in organs such as hearts and joints, and on the surface of implanted devices e.g. valves or prostheses.

The biofilm protects its bacteria from antibiotics, creating a barrier against the drugs, and encourages them to develop antibiotic resistance.

Matthias is looking for ways to help destroy this biofilm matrix by targeting molecules that the bacteria use to make and modulate the lipid (fatty) part of the biofilm, in particular a group of enzymes called serine hydrolases.

He will be figuring out how these enzymes work to make biofilms grow and become sticky, and will also be designing and optimising small molecules that bind to and deactivate only these enzymes.

The small molecules can be used to develop therapeutic compounds that directly target the metabolism of the biofilm, potential new Staph antibiotics.

The project is a collaboration with colleagues from Stanford University and the Arctic University of Tromsø, and Matthias will be mentored by Otago Biochemistry’s Professor Kurt Krause.

Alongside discovering new ways to combat bacteria and establishing his own research group, Matthias hopes to use this award to foster closer connections between the Otago University Biochemistry and Chemistry Departments.

It took Matthias a while before he was comfortable calling himself a biochemist rather than a chemist.

As many Otago biochemists do, he grew up far from New Zealand, in the Austrian city of Vienna. He also completed his undergraduate degree there, but in chemistry.

In 2011 he both crossed the world and started his cross-over to biochemistry when he came to Dunedin to study for his PhD with Professor Guy Jameson in the Chemistry Department. As part of that project, Matthias needed to work closely with co-supervisor and Otago biochemist Associate Professor Sigurd Wilbanks, and so started his time in the realm of biochemists. After completing his PhD, he also spent a short time working in up the hall in Associate Professor Liz Ledgerwood’s lab.

His first postdoc position required a relocation to the USA, at Michigan State University (2015-2018), but Matthias decided to return to Dunedin, thanks to New Zealand family ties and a second postdoc with Associate Professor Peter Mace.

Matthias has been based at Otago Biochemistry since, steadily cementing his reputation as a highly competent biochemistry researcher in the area of protein structure and function.

You can find out more about Matthias's research here: