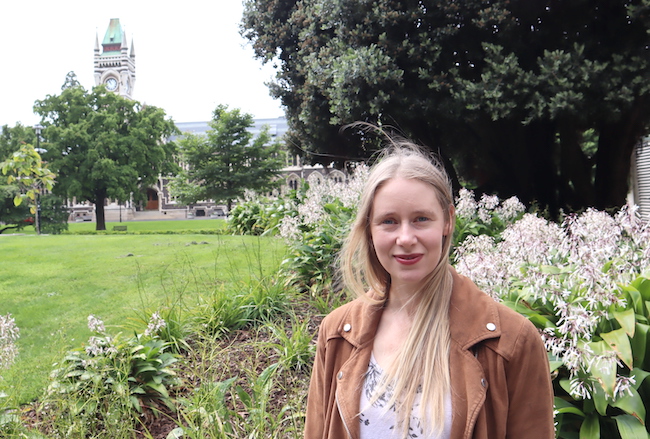 Along with nine others from the Department of Biochemistry, Gemma McLaughlin graduates with her PhD this week. But the journey that Gemma took to get to this point turned out to be very different to the one she thought she would take when she started her PhD study.

To be fair, Gemma started with an extremely ambitious goal: to find a better way to manage wasps in New Zealand using genetic-based tools. And she didn’t anticipate having to juggle a global pandemic and a baby as well.

To achieve that ambitious goal, Gemma started by finding the most suitable research group possible – that of Otago Biochemist Professor Peter Dearden, who has a notable track record of genetic research in insects, particularly that of the honey bee.

Bees and wasps both belong to the insect order Hymenoptera and the suborder Apocrita. The German wasp (Vespula germanica) and the common wasp (Vespula vulgaris), originally found in Europe, have now established themselves in New Zealand, with devastating consequences.

Besides making it uncomfortable for humans to be outside, these introduced wasps kill bees and baby chicks, and eat nectar from native trees, robbing native insects and birds of food. Wasps cost New Zealand $133 million a year from their impacts on farming, beekeeping, horticulture and forestry workers, according to the Department of Conservation.

RNA interference, or RNAi, is a technique where short pieces of RNA are introduced to cells to silence the expression of particular protein-coding genes in a very precise way.

CRISPR gene editing uses a another set of molecules to precisely edit the genomic DNA sequence of a target gene directly. Gemma investigated a new branch of CRISPR called Receptor Mediated Ovary Transduction of Cargo (ReMOT Control) where changes can be introduced directly to the ovaries of a wasp in order to alter the genetics of its offspring. Ultimately this technique could be used in a ‘gene-drive’ method of reducing the wasp population – a painless method of pest control that is being trialled with mosquitos in other parts of the world.

As is always the way with worthwhile research projects, there were big obstacles for Gemma to overcome.

To start with, it turns out to be really, really hard to rear wasps in the lab.

Gemma and her colleague Josh Gilligan spent summers digging up wasps nests from people’s backyards and bringing them back to the lab, but they struggled to keep the colonies alive.

“They're super successful invasive species, you know, with the highest densities here than anywhere else in the world, and you’d think they'd just thrive in any environment, but no, not in the lab, they were just dying,” said Gemma.

Although getting the wasps to reproduce in-house wasn’t successful, Gemma managed to keep them alive for long enough to make progress with her research.

She carried out the RNAi research in full, but unfortunately the results told her that the method was not an effective wasp-control path worth continuing with.

“The RNA interference didn’t really work at all. I think I had one [specimen] that showed a phenotype, but she died as a pupa.”

She hopes that this work will be able to be taken further in the near future, especially as New Zealand reviews these laws.

There were still other mountains for Gemma to climb, that combined themselves into one big challenge:

“Yeah, I had a Covid baby. The timing of that was not ideal... I was on leave during wasp season as well. So that didn’t help. He was born Boxing Day, and then I took two months off... and then adjusting to going back part time with a kid - that was rough. But Peter was very supportive about it all as well, so that was good. And he was saying, take as long as you want, this is time you don't get back... It was quite good in that regard.”

Squeezed around all of this, Gemma managed to investigate other aspects of wasps to produce resources valuable for research into wasps and beyond: wasp venom analysis and reference genes.

She selected and verified a panel of reference genes for wasps, a valuable resource for future wasp genetics research.

Reference or “housekeeping” genes are expressed at a constant, known level in all cells of an organism regardless of conditions. They are used as controls when you study the expression levels of other genes.

“I did a whole thing on reference genes as well for analysis because there's been nothing done on them. And also the reference gene literature [for wasps] is terrible. People just rely on these two reference genes and use them for everything and that's really not what you should be doing across all experimental conditions.”

Finally, Gemma delved into an entirely different aspect of wasp research, using mass spectrometry data to identify the molecules (peptides) that make up wasp venom. She found peptides that had not been isolated and identified before:

“I compared [the wasp genome] with 24 other hymenoptera genomes to see the evolution of those peptides, where they were present in some and not others. I found one that was just in the [wasp] family Vespidae, which was cool, so that could be used for diagnostic processes and that sort of thing.”

Despite all the obstacles, Gemma has conquered her PhD research, mastered an astonishing range of research skills, and successfully laid the foundations for further research into genetic wasp control in New Zealand.

Ka mau te wehi Gemma! What you have done is awesome, and we look forward to hearing about your next adventures.