Dr Katerina Achilleos and Dr Liam Turk from the Department of Biochemistry have each been awarded one of the highly competitive Health Sciences Career Development Postdoctoral Fellowships.

These fellowships provide two years of salary to PhD graduates who have had less than three years' postdoctoral experience and who have the "greatest likelihood of becoming the next generation of researchers and academics". There are only two positions available in each funding round, open to researchers in the Health Sciences Division of the University. 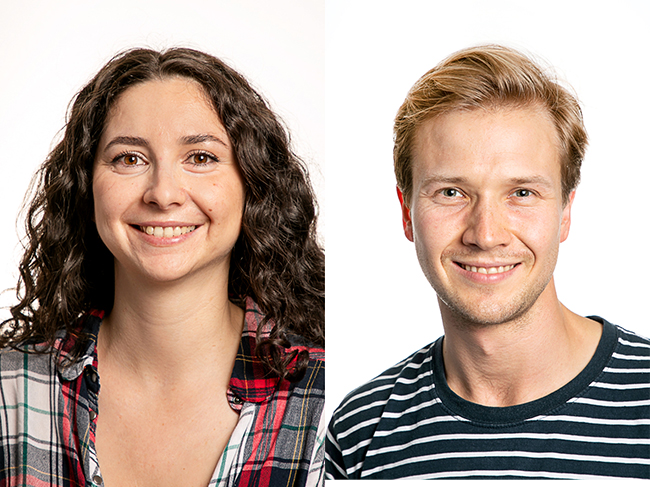 Liam Turk is from New Jersey, USA, and did his undergraduate degree at New York University (NYU). He then completed a masters and PhD at Rutgers University

Liam works in the laboratory of Associate Professor Peter Mace, and his research project at Otago focuses on a family of transporter proteins that shuttle drugs and other molecules in and out of cells. One well-known drug transported by these proteins is metformin - the first-line treatment of type 2 diabetes. Liam wants to solve the full-length structures of these integral membrane proteins in their various conformations using cryo-electron microscopy and nanobodies that can capture these proteins in different functional states.

He will be working in collaboration with Peter Shepherd's group at the University of Auckland to study how the structure of these proteins and the mechanism by which they interact with small molecules are affected in genetic variants of interest. They hope to provide meaningful information that can ultimately be used to better understand metabolic health and treatment options.

Liam says that he and his partner are "slowly immersing ourselves in Dunedin culture. I cycle and run in and around town in all of Dunedin's fantastic weather. I also read everyday and look forward to weekend Pak'nSave trips." - Liam clearly has a sense of humour!

Katerina is from Cyprus; she moved to Dunedin in 2016 to undertake PhD studies. Her research has focused on habitat-forming marine invertebrates, which have mineralised exoskeletons - corals are the most well known example of these, although Katerina worked mainly on the less well known bryozoans. Katerina incorporates molecular and bioinformatic skills with her ecological studies and uses these different approaches to investigate how environment and biology influence biomineralization - the process by which species construct hard structures from minerals.

Biomineralization is a highly controlled process, depending on both environmental and biological factors. Carbonate exoskeleton formation is very vulnerable to environmental stressors such as temperature fluctuations and acidity, and any decrease of biomineralization in habitat-forming species has flow-on effects on many other organisms. Some of our most treasured marine habitats are already under enormous threat from climatic changes.

Katerina's research investigates skeletal formation of two of these species (the invasive bryozoan Watersipora subatra and the endemic blue tubeworm, Spirobranchus cariniferus, toke pā) at the single cell level. This will provide information on the molecular machinery of biomineralization and hopefully enable us to understand the likely impacts of climatic changes on these processes.