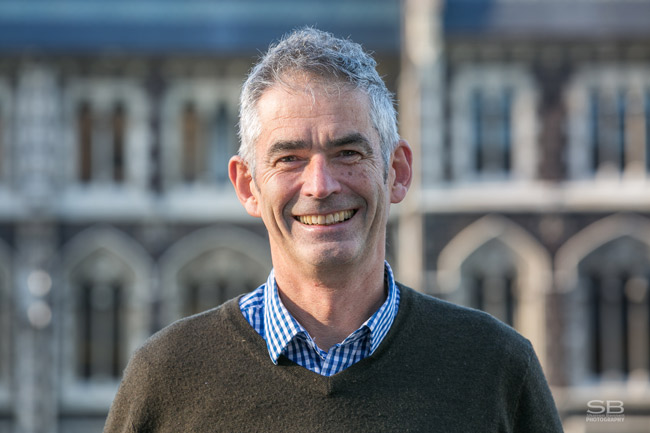 Professor Parry Guilford says seeing an electron microscope photo of a virus perched on the surface of a bacterial cell in his School Certificate Science text book marked the beginning of his interest in medical research.

Professor Guilford is now an internationally renowned cancer genetics and biology expert. He was today named as this year’s recipient of the Distinguished Research Medal, the University of Otago’s highest distinction.

But he still remembers that photo.

“It was a scene of exquisite brutality that stimulated my interest in the molecular basis of disease.”

This fascination has seen Professor Guilford go on to pursue an impressive career beginning with an Otago MSc followed by a PhD from Cambridge.

Among the most well-known of his outstanding national and international contributions to the fields of cancer biology and cancer genetics is his work in identifying the first known gene for fatal inherited gastric cancer, which has allowed many lives to be saved worldwide.

"Not only has Parry Guilford made fantastic achievements in cancer diagnostics and prognostics, he has also formed strong bonds and worked closely with a number of groups affected by several of the cancers he studies."

The genesis of this discovery came after a partnership with an affected North Island Māori whanau who came to the University’s Cancer Genetics Laboratory hoping for help in understanding why so many of their family members were dying of the disease.

Professor Guilford and colleagues were able to develop a simple genetic test to determine which family members would benefit from early intervention (through stomach surgery) to eliminate their risk. Since then the test has been deployed around the world. Previously, there was a 70 per cent death rate for carriers of the mutations involved, but now most mutation carriers lead largely normal lives.

His work as Chief Scientist Officer with Pacific Edge Ltd, a spin-off from his research at the University, guided the notable success of this young New Zealand company with the development of CxBladder, a urine test for bladder cancer. This test, which reduces the need for painful bladder cystoscopies and reduces healthcare costs, is increasingly being used in the US and by New Zealand’s District Health Boards.

His research, which has resulted in 82 publications in peer-reviewed journals has received major support by funding bodies such as the Marsden Fund and the HRC. He is currently director of the University’s Centre for Translational Cancer Research.

The University awards the Distinguished Research Medal for outstanding scholarly achievement, including the discovery and dissemination of new knowledge, the development of innovative technology, or the development of concepts that lead to significant advances.

Announcing the honour Vice-Chancellor Professor Harlene Hayne extended her warmest congratulations to Professor Guilford, who she says is the very model of an excellent scientist who has not only produced ground-breaking research, but also worked assiduously to translate it into commercially-available products that are benefiting cancer patients around the world.

“Not only has Parry Guilford made fantastic achievements in cancer diagnostics and prognostics, he has also formed strong bonds and worked closely with a number of groups affected by several of the cancers he studies,” Professor Hayne says.

"I’m delighted to receive this honour, but I’ve only been able to achieve what I have thanks to the close support of many colleagues over the years."

Professor Guilford says his team’s research over the last few years has built a strong understanding of new cancer diagnostic methods and also the molecular basis of both familial and sporadic stomach cancer.

“The challenge now is to pull many new threads of information together as quickly as possible and turn them into new, practical tools for the prevention and treatment of cancer.

“I’m delighted to receive this honour, but I’ve only been able to achieve what I have thanks to the close support of many colleagues over the years,” he says.

“I must make special mention of Tony, who has guided my career for many years – sometimes bluntly – more often discreetly, but generally in the right direction.

“Also, all the patients and families affected by cancer who have contributed to our research – this medal is for them. Finally, I would like to acknowledge my family – for putting up with the countless lost looks as I have tried to build my own imaginary vision of the sub-microscopic world where the battle for our health is played out.”

The Distinguished Research Medal will be presented to Professor Guilford when he delivers a public lecture in November this year.