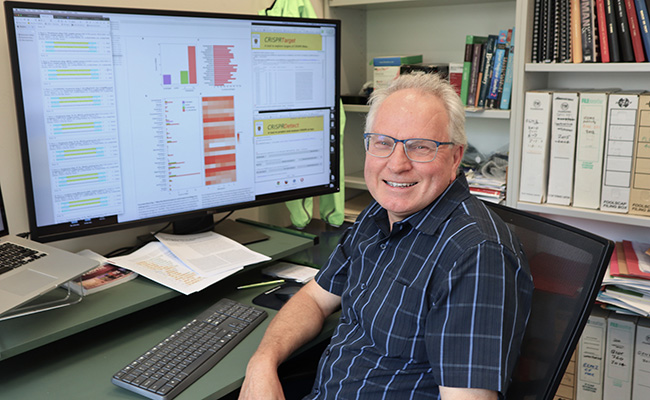 Dr Chris Brown uses research software developed at the University of Otago to analyse CRISPR defence systems in bacterial genomes. The results contributed to a recent study published in Nature on bacteria-virus interactions shown in the centre of the screen.

University of Otago researchers have contributed to an international study which helps improve the understanding of bacteria and viruses.

Published recently in the international science journal, Nature, the study reveals how bacterial immune systems can be harmful for their hosts, and why they are not found in all bacteria.

Researchers at the University of Exeter in the UK, with support from the University of Montpellier in France and the Otago team, made the suprising finding that existing CRISPR anti-viral immunity was often a disadvantage to the bacterium when infected by certain viruses.

CRISPR has become well known for its repurposing as a tool for precise genetic engineering. However, CRISPR systems (segments of DNA) naturally occur in many bacteria and have the important function of providing bacteria with immunity against viruses or foreign DNA.

This triggered a major question as to whether autominnunity is important in other bacterial pathogens. Otago researchers Dr Chris Brown, Dr Teyuan Chyou and Professor Peter Fineran, used bioinformatics to address this question by analysing more than 170,000 bacterial genomes, including diverse pathogens. The software used was developed by the Brown and Fineran groups at the University of Otago, while recent Otago PhD graduate Bridget Watson contributed to the experiments in the UK.

“We searched the DNA sequence for CRISPR systems and integrated viral genomes. We found that CRISPR autoimmunity was likely to be widespread in nature,” Dr Brown says. 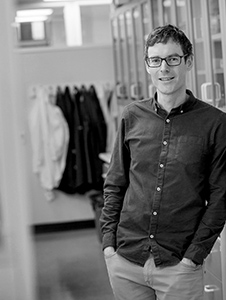 Professor Fineran explains this suggested that triggering the powerful CRISPR defence systems is risky for a bacterium. “Importantly, this may help answer a long-standing question of why these defence systems are absent in 60 per cent of bacteria.”

For example, Staphylococcus aureus pathogens that often take up extra genes to become multidrug resistant, seldom have CRISPR defence. An example of this is MRSA (Methicillin-resistant Staphylococcus aureus) an infection often occurring in people who have been in hospitals or other healthcare settings like residential care homes, which has become resistant to many of the antibiotics used to treat ordinary staph infections. It seldom has CRISPR defence.

This study forms part of larger studies aimed at understanding the arms race between bacteria and their viruses and has significant implications.

“Importantly, this change in understanding of pathogen defence systems will inform the design of new treatments, particularly those using viruses that kill pathogenic or antibiotic resistant bacteria,” Dr Brown explains.