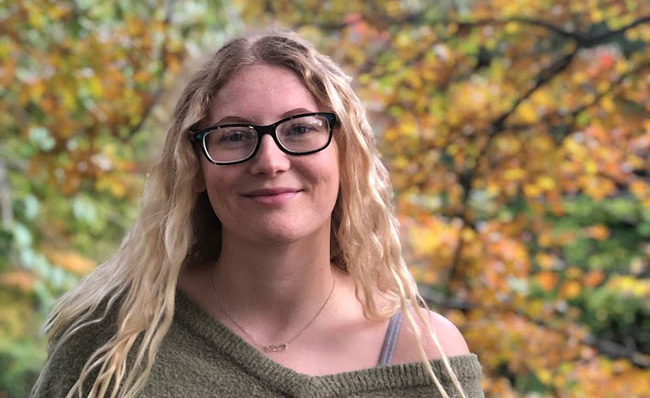 Otago Biochemistry MSc student Tyler McCourt has been awarded the 2020 Joan Mary Anderson Award in Plant Science. She works under the supervision of Lynette Brownfield, studying the control of male sterility/fertility for use in plant breeding.

She is working specifically on ryegrass, and the weed species Arabidopsis thaliana, a widely used plant research "model".

Generating reversible male sterility will have various potential applications including in the development of a wider range of elite hybrid crops which are better yielding and more robust in the environment, in bio-containment, and in the control of invasive weed species.

Tyler grew up in Hawke's Bay where she developed a love for the outdoors, particularly the beach and the sun!  Moving to Dunedin for university in 2017 was her first move away from the area.

Tyler was always interested in science and had ideas about becoming a dentist, however a degree in biochemistry seemed a better choice after her first year of study.

Learning about photosynthesis in her second year focussed her interest on plants. She says, "I actually really loved the topic and after looking into the third year plant biotechnology papers I was pretty sold."

Last summer she had a studentship with Plant and Food Research at the Hawke's Bay site working with the plant pathology team, "the coolest experience and really solidified that I want to work in the world of agriculture and plant science."

Her particular interest is in breeding and crop improvement, and she would like to pursue a career in that area.