The 1st of July 2020 marked a significant milestone in the career of Warren Tate as he took up his new position in the Department, as Emeritus Professor. This title is not conferred automatically on retirement, but is awarded to those who have made a distinguished contribution to teaching and research in their field, and in service to the University in general.

There can be no doubt that Warren absolutely personifies these attributes, and we have put together a newsletter "special edition" tribute to him, celebrating his very distinguished career. 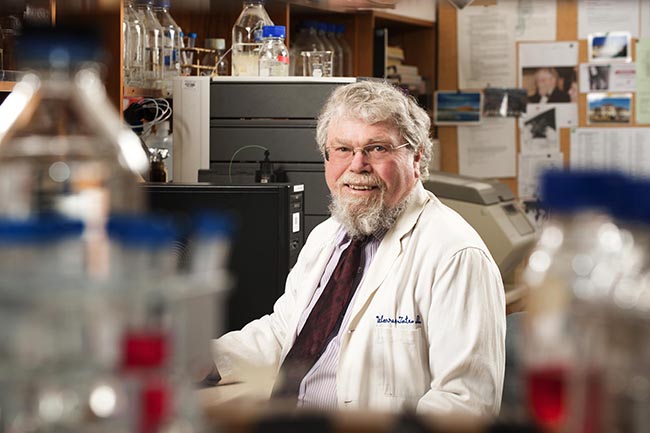 Warren has had a long and illustrious association with the Department, having been in the Department for longer than almost everyone! First starting here as a PhD student in 1969 then joining as lecturer in 1975. That is continuous employment for a period of 45 years and appointment as Professor for more than 30 years. You can find many milestones on Warren's timeline (see newsletter link). The timeline highlights just a few significant academic achievements as well as illustrating Warren’s passion for the arts and partying!

The excellence of his research has been recognised in a number of ways – FRSNZ, Marsden Medal, and Rutherford Medal to name a few. Warren has always had a long lasting thirst for new knowledge, as can be seen by the way his research interests have shifted over the years. A true scientist driven by curiosity, always asking questions -who doesn't remember his questions at seminars – which were more often than not punctuated by a pun!

Warren is highly regarded by many for the expert care he has provided to many postgraduate students. Alumni from the Tate lab have gone on to excel in many ways, all over the world. Warren has been an outstanding undergraduate teacher in the Department, contributing to multiple papers and programmes over many years.

Warren’s service to the wider research community is also extensive and varied. He has reviewed many a scholarship and grant application and has been a wonderful mentor to many emerging scientists both within and outside of the Department. He has had significant leadership roles in national research organisations that have benefitted New Zealand science including HRC, MBIE, the MWC and PBRF assessing panels.