Retirement with a twist for extolled Professor 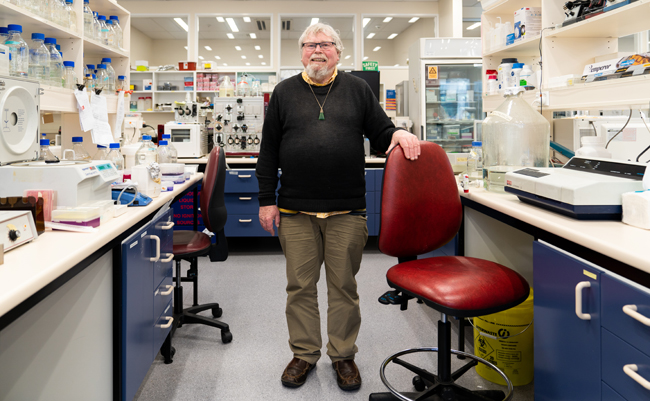 Not everyone approaches retirement the same way. For newly appointed Emeritus Professor Warren Tate, retirement is a term that speaks more about gradual change than an abrupt cessation of work.

Technically, the famed biochemist and University of Otago stalwart retired on June 30 of this year. But there is a lot of work left to do, Emeritus Professor Tate says. And he intends to continue doing it.

That work began in 1967 when he first joined the Otago University as a summer student before starting his PhD here the following year. After a scientific OE he has held a continuous position here since 1975 with his research ranging from protein synthesis, genetic recoding and memory mechanisms, and the molecular mechanisms of unexplained human diseases. He has become a notable expert on myalgic encephalomyelitis/chronic fatigue syndrome, and became a Professor in 1989.

"Being able to help them realise their potential, and then later to see them perform so well on the national and international stage in their developing careers, has given me so much fulfilment."

But the research and the titles are not what he first mentions when asked about the highlights of such a notable academic career.

"The 'day-to-day' highlight has been to work with incredibly talented young people. Being able to help them realise their potential, and then later to see them perform so well on the national and international stage in their developing careers, has given me so much fulfilment.

“Most have remained friends for life and I now feel really blessed as I move to this late phase of my own career to have such deep ongoing and sustaining relationships with them.”

As well as bringing lasting relationships Emeritus Professor Tate’s career has been peppered with significant national and international accolades.

In 1992 he received an International Research Scholar award from the Howard Hughes Medical Institute of the United States. He is one of only two New Zealanders to receive that award, joining an elite group of US medical bioscientists.

In 2010, he was awarded the Rutherford Medal by the Royal Society of New Zealand – the country’s top science honour. That was a “most amazing and unexpected” moment, he says.

“It brought with it huge mana and that has enabled me to use it in many positive ways in the last 10 years.”

In 2011 he was made a Companion of the New Zealand Order of Merit for his services to science. A particularly poignant recognition was being awarded the Marsden Medal in 2018 by the New Zealand Association of Scientists.

“That was personally so rewarding to me as it had been won previously by my brother, who had passed away in the same year from motor neurone disease. Through that award I was able to honour his memory and his contribution to science.”

"It was a wonderful opportunity to help advance the careers of fellow academics, enhance the fulfilment of general staff, and facilitate opportunities for a wider group of students than just my own research students."

Emeritus Professor Tate served as Department of Biochemistry Head of Department between 1999 and 2005, a role he describes as “a huge privilege”.

“It was a wonderful opportunity to help advance the careers of fellow academics, enhance the fulfilment of general staff, and facilitate opportunities for a wider group of students than just my own research students.”

He also served and represented both the University and New Zealand in an extensive array of convenorships, advisory and service roles.

He plans to continue, with his research group, to be meeting research contracts and commitments at least until the end of next year, and will still teach by invitation in some courses.

“So, this change will be a gradual transition away from the close contact I have had for over 50 years with undergraduate and graduate students.

“But when my student contact finally fades away that will be my most difficult challenge. These contacts have been the most fulfilling part of my career. When I am being inspired by the agile young minds of 20-year-olds every day I imagine I am one of them. It has sustained my idealism and has enabled me to sustain creativity and innovation in my work.”

One of those younger minds, Postdoctoral Fellow Dr Eiren Sweetman, says Professor Tate was more than just a supervisor, researcher or boss.

“He has been my mentor. He’s given endlessly of his time to support and encourage me throughout my university years and into my early career, as he has done for a huge number of young scientists and students over the years.”

“He is an incredibly kind and wise leader and 100 percent dedicated to his students. His passion for science is infectious. He has a fantastic talent for communicating his enthusiasm and knowledge to any crowd - whether they are first-year university students, members of the public, or fellow experts in the research field.

"Being able to continue with this title to contribute further to the vibrancy of the University of Otago while I am still physically and mentally able is very satisfying."

“If I had to describe Warren in a few words, I’d say kind, dedicated and humble.”

Emeritus Professor Tate says his new appointment is “an honour reflecting the acknowledgment by the University of the contribution I have made to it over my academic career”.

“A complete shutdown of my academic life would seem inconceivable to me. Being able to continue with this title to contribute further to the vibrancy of the University of Otago while I am still physically and mentally able is very satisfying.

“I hope as an Emeritus Professor I will be able to continue writing scholarly articles, and I have accumulated so many experiences and have so many scientific stories to tell that it remains to be seen whether these will eventually be put to paper.”

Of course, there is more to life than work, research and scholarly articles. Emeritus Professor Tate says he intends to put more time into the City Choir Dunedin, which he sings in and provides leadership for as Chairperson of the choir’s management committee.

“Already a significant part of my life, it is likely to become even more significant as my available time gradually expands. I also love growing plants and have a large enough property that it could easily engulf me every day.”

It’s that need for busyness, purpose and forward progress that has been evident throughout Emeritus Professor Tate’s career. And it is clear it will be propelling him still over the coming years.