On the evening of 16th November, family, colleagues, and members of the public were treated to an entertaining and informative talk as newly promoted Professor Richard Macknight gave his inaugural lecture - a fascinating overview of 30 years of research, mainly on the control of flowering time in plants. 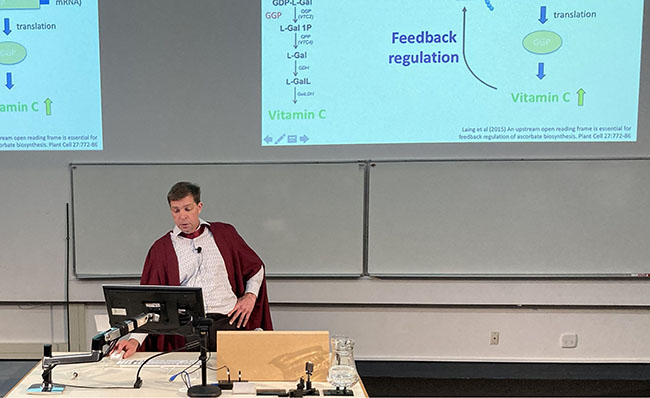 Richard joined the Department of Biochemistry as an undergraduate in 1987. He completed BSc(Hons) in 1990 under the supervision of Associate Professor Kevin Farnden, followed by a PhD in 1993 supervised by Kevin Farnden and Dr Paul Reynolds - who is currently chairman of the board of directors of AgResearch but was then working as a scientist at HortResearch. This joint academic/CRI PhD supervision set the scene for much of Richard's career, and he held a 0.2 appointment as a scientist with Plant & Food from 2012 to 2019.

Richard returned to New Zealand in 1998 after post-doctoral work in the laboratory of Professor (now Dame) Caroline Dean at the John Innes Centre in Norwich, England. It was at the John Innes Centre that he began his work on flowering time, and he brought that interest (verging on obsession) back with him when he set up his research group in the Department of Biochemistry.

In his lecture, Richard clearly explained the genetic mechanisms that allow plants to flower in response to environmental cues such as day length and temperature, and how mutations in specific flowering genes were necessary for the domestication of crop plants. He further described how the ability to manipulate flowering time, either by traditional breeding or using contemporary genetic technologies, can be a powerful tool to increase agricultural production on a constant area of land to feed the world's population.

Richard described how his research with Plant & Food colleagues resulted in the discovery of the hormone that controls bulb formation in onions and how to increase vitamin C levels in fruit. His most recent project, in collaboration with Dr Lynette Brownfield, AgResearch and ryegrass breeding companies, is to try to use the knowledge of flowering time control to breed a cultivar of ryegrass that does not flower at all unless exposed to specific environmental factors. No flowers mean more leaves and more food for farm animals to eat.

Richard acknowledged the contribution of his mentors; the fifteen PhD students, eleven MSc students, and sixteen honours students he has supervised; and the eleven technicians and post-doctoral fellows he has employed so far in his career here at Otago.