Emeritus Professor George Bouet Petersen ONZM FRSNZ died in hospital on 11 July 2021, aged 87. Although his physical health had been failing for some time, his mind remained as active and curious as ever and he welcomed visits to his home from old friends for spirited discussions.

George Petersen was born in Palmerston North in 1933. He graduated from the University of Otago in 1956 with an MSc followed by a DPhil from the University of Oxford where he was a member of Balliol College. On his return to New Zealand he worked at the DSIR in Palmerston North until 1968 when he was appointed to the Chair in Biochemistry at Otago at the ripe old age of 34! He remained Head of Department until 1991. He took on a part time appointment as Deputy Dean of the Division of Health Sciences and continued as an active researcher until 1999, when he retired at the then compulsory age of 65. He maintained a presence in the Department for many years afterwards with an office on the third floor and contributing to the research of Dr Stephen Sowerby, who had been his final PhD student. 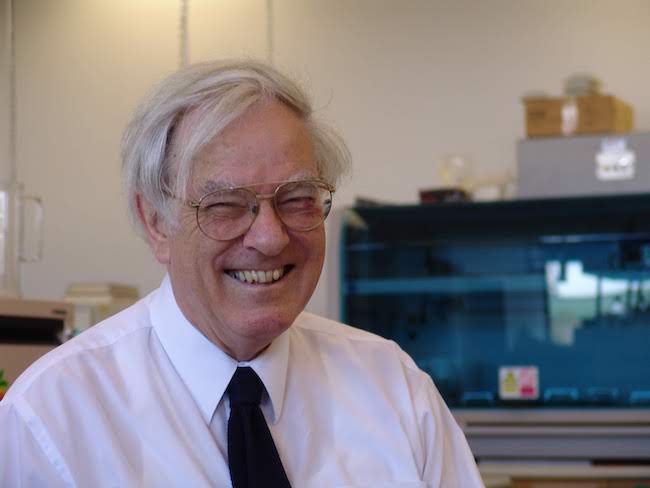 George's love affair with DNA began at Otago with his choice of "The role of nucleic acids in the biosynthesis of proteins" as a special topic in stage III BSc studies. At that time it had been thought that protein synthesis was a sort of reversal of proteolysis - evidence that nucleic acids were somehow involved was just beginning to emerge. After graduating he was accepted for DPhil studies at Oxford by Hans Krebs (newly appointed Whitely Professor of Biochemistry, later to become Nobel laureate Sir Hans Krebs) who suggested he approach Dr Kenneth Burton for a research project. Both men had an interest in working out how the sequence of nucleotides in DNA strands could be determined, and so began the next step in George's DNA journey.

On his return to New Zealand George continued his work on DNA at the DSIR Plant Chemistry Division, becoming the only scientist working on DNA in the southern hemisphere - a rather lonely position, with the only means of collaboration being slow mail or expensive phone calls. The DSIR was very accommodating, offering him two years back at Oxford on half pay in order to extend his experience in the field, again working with Kenneth Burton.

In 1968 George returned to Otago as Professor and Chair in Biochemistry following the early retirement of the previous Chair, Professor Norman Edson. In addition to continuing his DNA research, he presided over the expansion of the Department, appointing a number of "young guns" - young graduates recently returned from overseas postdoctoral work in a variety of biochemical fields, and continuing Edson's plans for construction of a new purpose-built home for the Department, largely modeled on the laboratories of Hans Krebs in Oxford.

Professor Petersen worked closely with Nobel laureate Frederick Sanger in his development of the "dideoxy" DNA sequencing method during a sabbatical in 1973, and on a later study leave in 1981 he and recent PhD graduate Diana Hill made a significant contribution to Sanger's sequencing of the λ phage genome - the first relatively large genome ever sequenced. In 1982 George and Diana published the full genome sequence of the bacteriophage f1.

Prof Petersen ("Prof" or "Professor" to undergrads - one just wouldn't have felt comfortable addressing him, or even referring to him, as "George") was a famous digresser. At his first lecture of a series he would hand out a big thick pile of lecture notes and inform the students that everything they needed to know in order to answer his exam questions would be found therein. He would then proceed to stand at the front of the class and make at least some attempt to address the lecture material before digressing in the most interesting and informative way, meandering off into fascinating anecdotes about all sorts of science related things, including his research and that of his collaborators. The words "but I digress" would be heard several times in the hour as he attempted to get back on track. He was wonderfully entertaining and educational to listen to - but if one's goal was to pass exams those notes he provided were absolutely necessary!

Professor Petersen received many accolades during his lifetime: he was elected Fellow of the Royal Society of New Zealand in 1985; he received a Doctor of Science from Oxford University in 1993 for his outstanding contributions of international significance to DNA research; the Marsden Medal of the New Zealand Association of Scientists in 1995 for outstanding national scientific leadership; was made Officer of the New Zealand order of Merit (ONZM) in 1997 for service to the community; received an Honorary Doctor of Science from the University of Otago in 2000 to honour many years of outstanding service to his university, his community and country; and was awarded the Rutherford Medal from the Royal Society of NZ in 2003, New Zealand’s top science medal.

His service to the community includes being Chairman of the NZ Government Advisory Committee on Novel Genetic Techniques (ACNGT), 1978–1998; being a member of the Medical Research Council of New Zealand 1979-1984; he was National President of the NZ Institute of Chemistry 1985-1986; President of the Academy Council of the Royal Society of New Zealand 1998-2000; and Chairperson of the Governing Council of Knox College, and Salmond College, 1989-2010.

Professor Petersen's memorial service was held at Knox Church on Saturday 17th July. Tributes were given by his first and last Otago PhD students, Professor Warren Tate (read by Professor Peter Dearden as Warren was unable to attend) and Dr Stephen Sowerby; by the current Chancellor of the University, Dr Royden Summerville QC; and by members of his family. These tributes described a loving husband and father, a lover of music and books, very involved in the communities of Knox Church and Knox College, "the father of DNA research in New Zealand", exceedingly accomplished but equally humble, and above all a good man.

As Warren Tate wrote in his tribute: "Rest in peace George - you have left a rich legacy that is ongoing and will be everlasting”.