Alex van der Weerden, on the frontiers of biochemistry research 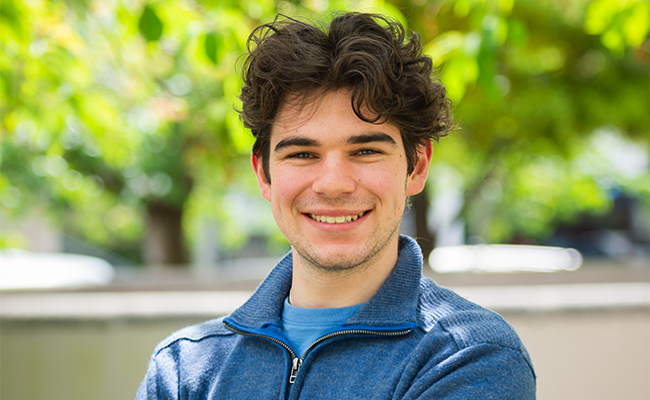 Alex van der Weerden is studying towards a Bachelor of Science (Honours) in Genetics, with the Department of Biochemistry.

The gifted young researcher has received a scholarship from The Maurice and Phyllis Paykel Trust for his honours research project: Investigating how non-coding RNA may drive disease.

Ribonucleic acid (RNA) is best known for carrying out the instructions encoded by DNA to make proteins. However, some RNA does not make proteins and instead has another function. These are non-coding RNAs.

As Alex explains, “Knowledge about the human genome is constantly expanding. New non-coding elements are being discovered which, rather than encoding for proteins, typically have regulatory roles in gene expression.

“The regulation of gene expression is increasingly being understood as crucial for normal cell function. Likewise, disruptions to gene regulation are constantly being seen as drivers of various diseases.”

During his undergraduate degree Alex was particularly interested in the content of Associate Professor Stephanie Hughes’ lectures, so he approached her to become involved with a summer research project with the Hughes Laboratory.

Alex says it was great to undertake a summer research project as it “gives you experience in how a lab works and finding out if this work is for you in a 10-week period before you commit for longer.”

He will now use the skills he learned over the summer, applying them to a new project. The lab recently discovered long non-coding RNAs what have critical roles in neuron function.

Alex’s current research is part of the continuing project by the lab, to further understand the role of how these non-coding RNAs contribute to neurological diseases. Alex says everyone in the lab has been hugely welcoming and he is enjoying being part of a team at the forefront of scientific discovery:

“The area of non-coding RNA is really cool because it’s so new. We’ve never really known that these things have this important purpose. The link between these non-coding RNAs and neurological disease hasn’t been explored that much so to be part of that ground-breaking area is amazing.”

“Research into this is important because RNA is something that is easy to target with drugs. Identifying how defective non-coding RNA may cause neurological diseases could open the door to a new type of RNA-focused therapy for these severe and often untreatable diseases.”

Alex also has a strong interest in theatre and has been closely involved with the OUSA Capping Show. However, science remains his main career focus. He is greatly enjoying life in the laboratory, particularly the process of creating a hypothesis and then setting out to test it and once he completes this honour’s project, he is considering getting some work experience in science.

The University of Otago is very grateful to be the recipient of these awards. The Maurice and Phyllis Paykel Trust was established in 1973 by the late Mr. Maurice Paykel, philanthropist and co-founder of the Fisher and Paykel group of companies. The charitable Trust is dedicated to the improvement of health through the support of research and sponsorship of research trainees in the health-related sciences. Each year in addition to its support of six honours scholarships, it provides funds for PhD students and staff to attend health-related research conferences and grants for research equipment.