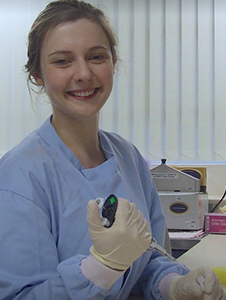 Graduating in absentia can be hard for any student wanting to celebrate but for Madeline McIntyre, she wouldn’t have it any other way.

Based at a rural farm in Victoria Australia as part of her studies to become a doctor through the University of Melbourne’s Rural Medical Education pathway, Madeline shares what took her from Dunedin to Victoria; a story that shows the makings of a 10-year commitment to the field of medicine.

The 28-year-old medical student began her studies at the University of Otago in 2017, after finishing a double-degree at Victoria University Wellington in a Bachelor of Arts and a Bachelor of Biomedical Science.

She was unsure of what step to take next and decided to do a postgraduate honours course in the Department of Anatomy. She completed her dissertation on tuberculosis research, which also earned her first-class honours when she graduated later in 2017.

“I had always wanted to be a doctor and so I applied to the University of Otago’s Medical School but was unfortunately waitlisted and so I decided to pursue my passion further by enrolling into a research-only Master of Science,” Madeline says.

Despite having a background in Biological Anthropology, Madeline decided to do her master’s with Associate Professor Stephanie Hughes in the Department of Biochemistry.

There she found out about Associate Professor Hughes’ research into Batten disease, a paediatric neurodegenerative disease, which would inspire her own master’s research.

“This is a rare but devastating genetic disease that causes blindness, epilepsy and progressive cognitive and motor decline in children, with symptoms beginning as early as eight months or as late as eight years of age,” Madeline says.

“Unfortunately, there is currently no cure and so my project investigated how two drug therapies, gemfibrozil and cannabidiol (CBD), alone and in-combination with a treatment called ‘gene therapy’ could potentially aid this.”

She found that the medications were not effective on their own, largely due to gene therapy still being in its infancy and very expensive, but that it was encouraging to see how effective this could be and provided a solid foundation for further investigations into a treatment regimen for CLN6 Batten disease.

With this research behind her, Madeline reflects on her Master of Science with fondness, as one of the “most challenging and rewarding experiences of her life”.

“I met amazing people, learned exciting and useful new techniques and experienced incredible highs during my research, but I also had to endure heart-breaking lows and setbacks, mental and emotional burnout and serious challenges to my mental health and resilience during my research,” Madeline says.

“I owe my success to the love and support I received from of my family, friends and lab mates because without them I wouldn’t have made it across the finish line.”

Unable to shake the call to medicine, Madeline decided to apply to the University of Melbourne to pursue her career to become a doctor.

“I have always been interested in studying medicine, but never felt like I was ‘smart enough’ to get in, especially having applied twice in the past and been unsuccessful.

“So, I took one last chance and somehow managed to get an interview with my first preference school, the University of Melbourne,” Madeline says.

“It was pretty overwhelming, representing the end of an almost decade-long journey to medicine, and I am incredibly lucky to have a supportive family who helped me find the funds to travel to Australia for study.

“I loved my time at University of Otago and am still in touch with the friends I made through my studies to this day.

"The skills I learnt through my research have also served me well during my medical degree and I imagine they will continue to help me navigate evidence-based practice as a doctor in the future."