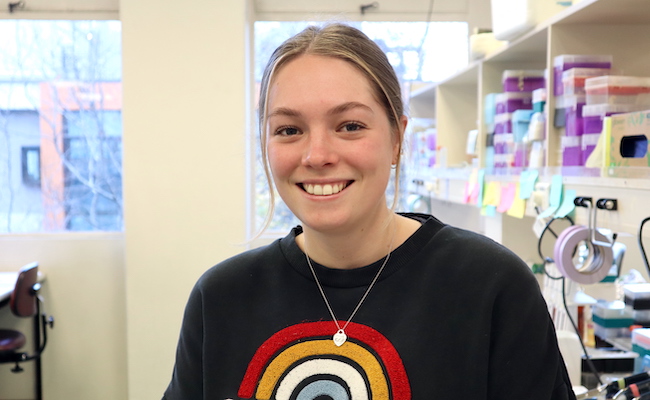 Master’s student Cait MacTaggart has the support of the Rotary and Lions Clubs in her hometown of Cromwell behind her as she launches into a career in health-related research.

The Topping Education Scholarship that Cait has just been awarded will pay her tuition fees for the first year of her master’s study, over $9,000.

The origin of the scholarship lies in a house build project led by the Cromwell Rotary and Lions Clubs to fundraise for a new St John’s ambulance station in the town. The project was so successful that enough money was left over to create the Topping Education Scholarship Fund, named for long-term Cromwell residents Vicky and Les Topping.

This is the first time that the scholarship has been given to someone with an interest in molecular research like Cait, having previously given to students training for healthcare work.

The Ledgerwood lab is interested in a network of genes that help to alleviate the oxidative stress on cells caused by everyday living, called the peroxiredoxin-thioredoxin network.

Cait aims to find out more about the regulation of genes in this network and look for clues that could lead to interventions which may aid in slowing the biological ageing process.

She will first extract DNA from the white blood cells of volunteers from three different age groups (18-25, 38-45 and 70-80 years old). Then she will find out whether the DNA of the genes she is interested in have little ‘methyl’ tags attached to them or not, using a technique called bisulfite sequencing.

The methyl tags dictate whether the genes in the DNA they are attached to are turned off or on. Cait will look for differences in the patterns of methylation across these genes between the different age groups.

Cait’s introduction to research is going well so far. “I’m really enjoying it. It’s been eye-opening and I’m learning so many new skills.”