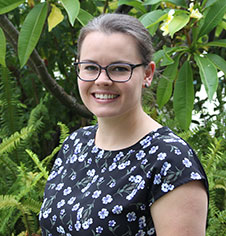 A budding interest in biology and chemistry at Taumarunui High School was the first step for Dora Leahy towards a career as a medical scientist.

Her careers counsellor suggested that forensic science would be a great fit, so she came to Otago with that aim.

“I chose biochemistry because it was a combination of my two favourite subjects in high school.
I’ve always wanted to know how things work in minute detail so biochemistry is ideal for that” she says.

After graduating with her BSc(Hons) Dora put forensic science aside, instead preferring to work as a research assistant in an academic research laboratory for a few years.

"I got that job by asking for it and visiting the lab a few times to talk to them … you have to actively get out there and search for potential jobs that haven’t been advertised."

Dora enjoyed that work, but career progression would have required PhD study, which wasn’t the right fit for her.

A cousin described her job of "medical scientist" in glowing terms, so that became Dora's goal. "I introduced myself to a senior scientist of one of the biochemistry labs here, and he passed my CV on to the heads of the genetic teams. Four months later I was given a call and invited for an informal interview. That was my first job in a diagnostic genomics lab."

Dora now works as a medical scientist. She tests DNA from blood samples of patients and carries out computer analyses to see if there is a mutation that is causing the patient’s disease. Then she writes reports for the doctors who order the tests.

She tests for a lot of different genetic disorders, including achondroplasia, which results in dwarfism, and congenital adrenal hyperplasia, which affects how the body makes steroid hormones.

“We don’t see patients at all, their doctors give them their results and they are referred to a genetic counselling service to help explain what their results mean for them and their family” Dora explains.

“My biochemistry background is useful to be able to think about how genetic variants are affecting the structure and function of proteins, and the workings of the cell and body. Quite a few people in my department studied biochemistry.”

Dora’s time at Otago not only provided her with the knowledge that underpins her job, but also a long lasting network of friends.

“I still have lifelong friends from Otago, especially my friends from Aquinas [residential] College who I flatted with for 3 years in Dunedin, and also some of my friends from my Honours class. We’ve spread out around the globe but I still think we have a close bond after all the hard work we went through together!”