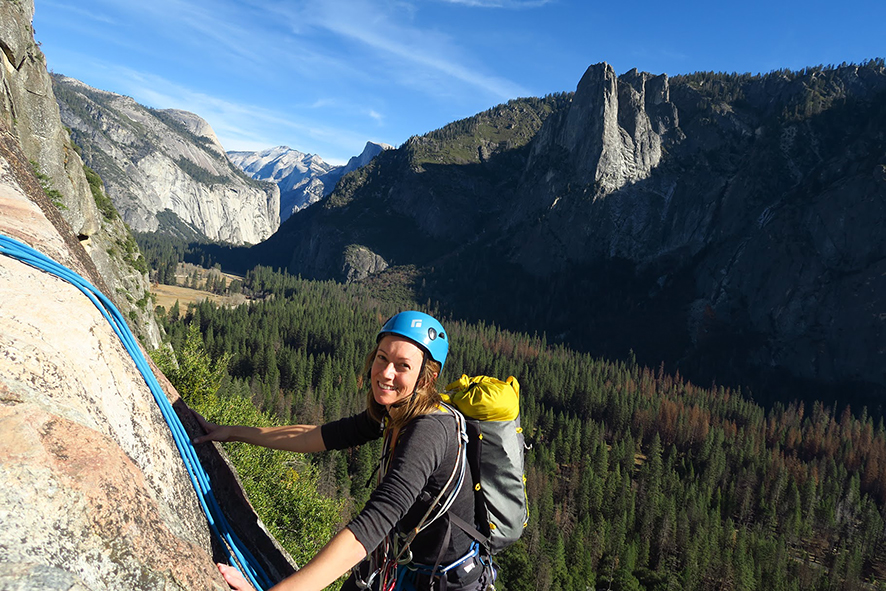 Sara Humphreys climbing at Yosemite National Park in the USA, on an outcrop called the ‘Manure Pile Buttress’. The profile of Half Dome is just visible in the background.

From the beginning, Sara Humphreys has been keen to explore the world around her, in all sorts of ways.

“As a child I fostered what has become a lifelong drive for adventure and exploration. It started with a curiosity about the great outdoors, but I quickly learned that I was just as interested in observing the quirky behaviour of molecules as I was in scaling mountains.”

She decided to go to the University of Otago mostly because it was close to the Southern Alps, and she enjoyed hiking and skiing. “Aside from wanting to get a university degree, I never really had a firm plan going in, except to allow myself to ‘have a really good think’.

She first chose subjects that would keep her in the running for medical school, but then discovered biochemistry.

“I rapidly became fascinated with the inner workings of biological organisms, and quickly realized that I was less interested in directly treating patients and more interested in the understanding how these incredibly complex systems work.”

Studying biochemistry laid the foundations for a deep interest in how life works at the molecular level. However, after completing her undergraduate degree, she wasn’t ready to entirely commit to science.

“I was never one of those people who had a career plan from the outset. To me, selecting a career without gaining experience in life didn’t make any sense at all.”

So, she spent six months travelling around New Zealand performing science shows in schools, then bought a one-way ticket to London and secured a job as an international flight attendant. After three years of travelling the world, encountering people from all walks of life and visiting far-flung places, Sara reassessed her direction again.

“I realized that my greatest sense of purpose stems from performing scientific research and extending knowledge.”

She decided to return to the lab, completing a post-graduate diploma in structural biology, and gaining a Fulbright Scholarship to pursue a PhD in America, at Washington State University in Pullman, a few hours outside of Seattle. There she focused on human drug metabolism and nurtured an interest in developing new therapeutics to treat disease.

The PhD led to a job at Amgen, one of the world’s leading biotechnology companies, in San Francisco. Amgen aims to discover and develop new treatments for diseases through understanding the fundamental biological mechanisms of those diseases.

Sara manages a team of scientists working across a wide range of projects where they design and test new treatments for diseases that were previously believed to be ‘undruggable’.

These treatments harness the processes that occur inside cells, such as RNA interference and proteosomal degradation, to change the concentration of specific target molecules.
Sara is now in her element. “It is truly fascinating work in a field that is rapidly evolving.”

And although recent world-wide events have restricted her a little, alongside her career at Amgen she continues her outdoor adventures.

“Climbing here has been pretty challenging with winter and the pandemic, but I’m hoping to get to Yosemite when it warms up a little.”