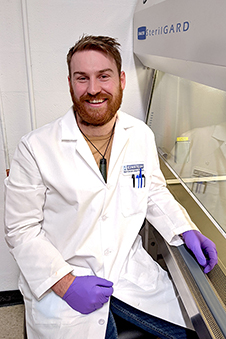 Tom Wiggins at a cell culture facility at the Albert Einstein College of Medicine in New York City.

Tom Wiggins has discovered that a postgraduate degree in biochemistry opens up career opportunities in amazing places around the world.

Originally from Hastings, he had two passions at high school: sports (rugby, canoe polo, squash, skiing, and mountain biking, to name a few) and science. And although he kept up some sporting interests at university (canoe polo and basketball), it was science that won his full attention, and has eventually led him to the bright lights of New York City, a setting as different to Hastings as you could imagine.

A career in academic research takes a lot of training. Tom first studied for a Bachelor of Science with Honours, which gave him a first taste of laboratory research, and inspired him to take on a doctoral degree, or PhD, which is like an apprenticeship for a career in research.

Tom studied for both of these degrees at the University of Otago’s Biochemistry Department, where he found that the skills taught are in demand at top research institutions around the world.

And because the researchers who mentor Otago Biochemistry students collaborate extensively with other researchers around the world, the contacts the students make through those collaborations can kick start their research careers.

Certainly, this was the case for Tom. The connections and experience he gained during his PhD ultimately helped lead him to his current role as a postdoctoral research fellow at the Albert Einstein College of Medicine in New York City, exploring new ways to combat the infectious disease tuberculosis.

“My work involves trying to understand why Mycobacterium tuberculosis is so incredibly difficult to treat with current antibiotics.”

“Without my PhD I would not have been able to get this position. To be able to live and work in New York City has been a fantastic experience and I look forward to what the future will bring.”