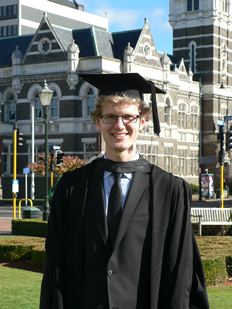 Matthew Prouse wanted a career where he could go to work each day and, as he explains, "learn about life and expand my understanding of the world."

He'd enjoyed Biology and Chemistry at secondary school, and had always been interested in living systems. At a Year 13 science camp, Matthew learned that with Biochemistry "it was possible to understand how life works at a molecular level… and that this knowledge could be applied to significant issues facing the world, such as health and environmental problems."

He wanted to study Biochemistry as "a choice which would be interesting and with good future career prospects."

During his studies, Matthew found the lecturers to be friendly people who were genuinely happy to help, and who wanted their students to succeed. He says, "there was definitely an atmosphere that encourages the pursuit of knowledge and understanding, and that’s really inspiring to be involved in."

After completing a three-year BSc, Matthew enrolled in the postgraduate BSc(Hons) programme. He says it, "it was the most intensive but rewarding year I have had so far in my life."

It allowed Matthew to conduct his own research project—the results of which contributed to understanding of an important biological system.

"It was thrilling," he says, "to know that I was probably the first person ever to do those experiments."

Reflecting on his time at Otago, Matthew says studying Biochemistry has given him "a specific tool set which is in demand for biotechnology companies and research groups," as well as "highly-transferable analytical and problem-solving skills, and an ability to think laterally."

He's about to put these skills to use, having joined a new research group studying how specific mutations are involved in the development of acute myeloid leukaemia, and how different mutations can affect the prognosis of the patient.