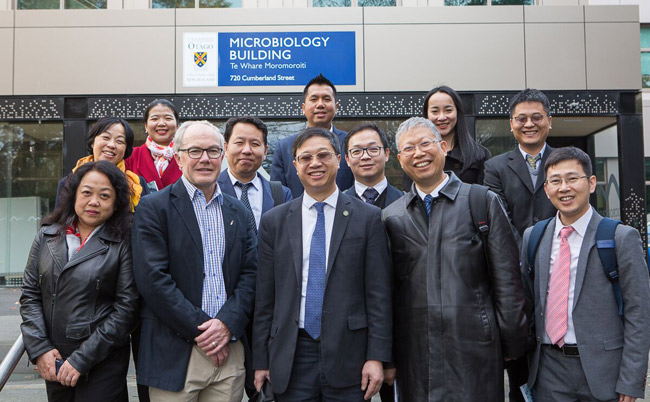 The University signed a Memorandum of Understanding (MOU) with one of China’s oldest universities last week, formalising a working relationship between researchers at the two institutions.

The relationship, between Otago Microbiologist Professor Gregory Cook and Jinan University Professor Ke Ding, has seen the pair work together for the past five years, developing new drugs to combat tuberculosis. By formalising this working relationship with an MOU the hope is to be able to widen the relationship and provide new opportunities for infectious disease research.

A visiting party, which included the President of Jinan University, Professor Song Xianzhong, toured Professor Cook’s lab and the Department of Microbiology and Immunology, before attending a formal signing held at the International Office.

Professor Cook says the MOU is an exciting opportunity for Otago, and wonderful for its profile in China.

“They want to establish a joint laboratory,” he says. “Allowing researchers from Professor Ding’s lab to perform key experiments in tuberculosis biology, and the other side of the equation is our researchers would go over to his lab at Jinan to gain access to compound libraries based on Chinese traditional medicines and natural products for inhibitor screening.”

Otago International Partnerships Coordinator, Chriss Hamilton, says the research relationship between Professor Cook and Professor Ding has driven the partnership that has resulted in the MOU.

Jinan University, founded in 1906, is based in Guangzhou and has more than 30,000 students.